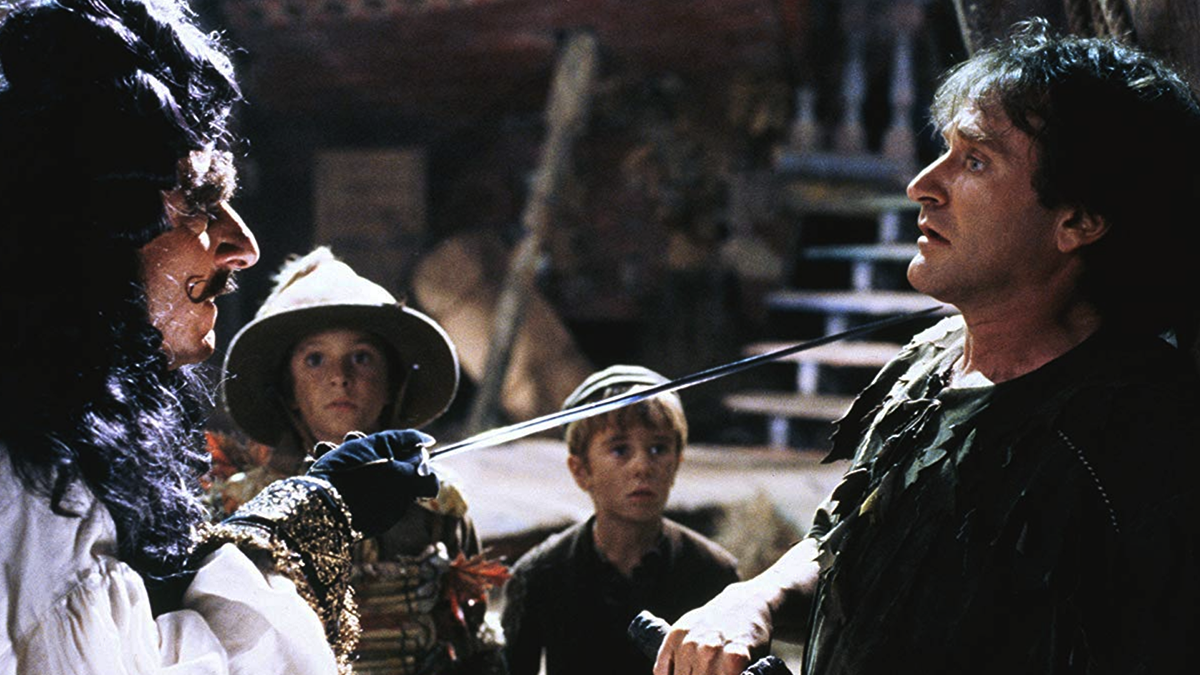 When it comes to the films of Steven Spielberg, there’s most likely one for everyone. I was looking at a list of his films while researching this movie and it occurred to me how many are my personal favorites. Admittedly I’m more of a fan of his work in the 70’s and 80’s with films like the Indiana Jones movies. But in the 90’s a lot changed for Spielberg and his films. He finally “grew up” with 1993’s Schindler’s List and 1998’s Saving Private Ryan. I do remember reading (or perhaps seeing) an interview with Spielberg who said that he made the movie Hook for one reason – he thought his kids would like it. It seems that every generation has a Peter Pan film and this is the one for the 90’s.

We meet Peter Banning (Robin Williams), a business man with two small children, yet he seems detached from his family life. A cell phone at his ear and swarmed by pressures from his job, he takes the family to London for a visit with Granny Wendy (Maggie Smith), the woman who adopted Peter at the age of 12 and raised him. The children fall asleep, a beam of light pierces through the window and the children are gone! So it’s off to Neverland to find the kids who have been kidnapped by Captain Hook (Dustin Hoffman) whose goal was to lure his rival back for another showdown. The thing is that Peter has no recollection of his life before his adoption. What’s a kid (adult) to do?

Until watching this, it’d been at least twenty five years since I’d last seen it. It’s not that I’m not a fan of the film, it’s just one that I’d not really thought to revisit. Looking back at some of the actor’s we’ve lost since then, notably Robin Williams and Bob Hoskins, it does serve as a testament as to how talented they were. Williams’ personification of a “grown up” Peter Pan hits the nail on the head and it seems that it’s a role he was born to play. Not to be overlooked is Dustin Hoffman’s performance as Captain Hook. Reportedly his suit and makeup were so hot, they had to install an air conditioner of sorts to keep him from having heat exhaustion! Add to that the casting of Julia Roberts who, at the time, was still basking in her Pretty Woman fame – the casting is spot on.

I’ve said this before, but it’s worth saying again – Sony’s 4K titles are simply the best-looking out there. I don’t know how or what they do, but more often than not I find that when looking at a 4K movie by that studio, it seems to exude what’d we’d expect of an Ultra HD title. This is the case with Hook and just how good it looks. The 2.39:1 HEVC 4K encode was personally supervised by director Steven Spielberg and it shows. Colors are rich and bold, detail has been improved and the HDR really gives new life to the film. The scenes in Neverland have never looked better. It’s truly a testament to the new format and what it’s capable of.

Hook soars onto 4K sporting a brand new Dolby Atmos soundtrack that really does pack a punch! Vocals are spot on, rich, clean and pure. John Williams‘ score is outstanding, lending Neverland an otherworldly air and punctuating the movie’s dramatic beats and action scenes with a real sense of soul. The energetic atmosphere (pardon the pun) engages the viewer and makes for a more entertaining watch. Yes, a good-sounding track can do this. The front-heavy sound stage is balanced by the surrounds and LFE adding just the right amount of emphasis in the air. Truly, this is an Atmos soundtrack done right.

There are better films by Steven Spielberg, but in the realm of his “kids” movies, this one will be near the top (I doubt if anything will ever replace E.T.). Sony’s technical presentation of the film excels on all levels. The Dolby Atmos track sounds amazing and the visual quality of the film has never looked better. The supplemental material is a bit slim, but I have to give kudos for the inclusion of extras we’ve not seen before.