As the world of Harry Potter entered the fourth year, the books were already a long-standing thing of the past. The first came out in 1998 and by the time that the movie version of Harry Potter and the Goblet of Fire hit theaters, the sixth book had just come out (Harry Potter and the Half-Blood Prince). It’s a well-known fact that the first two, and to a lesser extent the third, were pure child’s play. The first two movies were brought to the screen not missing so much as a semicolon and the third, though more artistic in nature, was very loyal to the novel. That’s not to say that the Harry Potter movies don’t pay homage to the pages that brought them to life, but as the books became longer and more complex, it’s understandable that there would have to be certain things that never saw the screen. Of note, the novel Harry Potter and the Goblet of Fire was ranked by Entertainment Weekly as the second most influential novel of the past 25 years (coming in first was Cormack McCarthy’s The Road if you were wondering). This is the fourth year for Harry and his friends, the dead middle of the series. Things change. We see Lord Voldemort for the first time. A student dies. This is Harry Potter and the Goblet of Fire.

Harry (Daniel Radcliffe) is anxious to start his fourth year at Hogwarts School of Witchcraft and Wizadry. His best friends Ron (Rupert Grint) and Hermione (Emma Watson) have always been there for him and as Harry makes his way to Ron’s house, they learn that the Quidditch World Cup is happening. As it turns out, they’ve got seats for what is unquestionably the biggest event of the Wizarding World. As their fourth year starts, we see that Lord Voldemort (Ralph Fiennes) has now assumed human form and is still dead set on his plan to get rid of Harry Potter. And, as fate would have it, for the first time in over a hundred years, there will be a year long competition between Hogwarts and two other schools. This is a once in a lifetime event for the students as they get to pit their skills against those from around the world. By chance, Harry is entered in the tournament (each school was supposed to only have one contestant) and is forced, by magical law, to compete. With Harry balancing his hormones, school, the tournament and trying to evade the “Dark Lord” will he manage to see the end of the school year?

As mentioned above, there’s so much that happens in the last four Harry Potter books, that it’s literally impossible to try and condense it into a paragraph. This book/movie is where the movies took a turn for the darker, and that trend would continue in the forthcoming books and films. By this movie, the fourth in the series, it’s very clear that the cast has become very immersed in their roles, they’re comfortable with their characters and with the movies being such a financial success, the bar was set pretty high. Each year has a new Defense Against the Dark Arts teacher and this is no exception. Alastair “Mad Eye” Moody (Brendan Gleeson) is one of the more colorful characters in the Harry Potter books and movies and the part is played to perfection by Gleeson. The rest of the ensemble cast is back and though the main focus is on Harry, Ron and Hermione we also do get a peek at Cedric Diggory (Robert Pattinson) who would make more of a name for himself as Edward in the Twilight movies. Does this movie have it all? It does.

Like the other installments in the Harry Potter series, this has been given a new 4K restoration that really showcases all that’s going on at Hogwarts. There’s a significant amount of CGI effects in this movie because, you know, dragons aren’t real! Colors are very bright, take for example the crimson in the Gryffindor robes. The detail in the dragons scales, the intricate scars on Moody’s face. Outstanding. Take a look around the interior of the school, the paintings move, and you can see so much more detail than in previous versions of this movie. As we might expect, the HDR gives a lot more color depth than the previously-released Blu-ray. Then again, it’s probably a placebo effect telling me that something newer is somehow better (not always the case). Still, die-hard Potter fans will snatch this up without a second thought as it does look amazing.

A good portion of the final act features some of the most robust sound I’ve heard out of a Harry Potter movie. And the new DTS X atmospheric track helps accentuate that sound. The LFE become very involved and the surround effects really give new life to the soundtrack. Take the ending sequence where Harry and Voldemort’s wands meet. The sound emanating out of the speakers makes you feel like you’re in the graveyard with them. Dialogue is very sharp and though some of the actors have some pretty thick English accents, it’s no fault of the audio mix. Harry Potter and the Goblet of Fire sounds fantastic, as expected.

It’s no secret that with Harry Potter and the Goblet of Fire things got dark. Really dark. Yes, the “fun” for lack of a better word, was over. Someone dies and from here on out it’s an all out war (that takes four movies for its culmination). The 4K looks simply gorgeous and the new DTS X track really breathes new life into the film. For true Potter fans, this one too is a no-brainer. 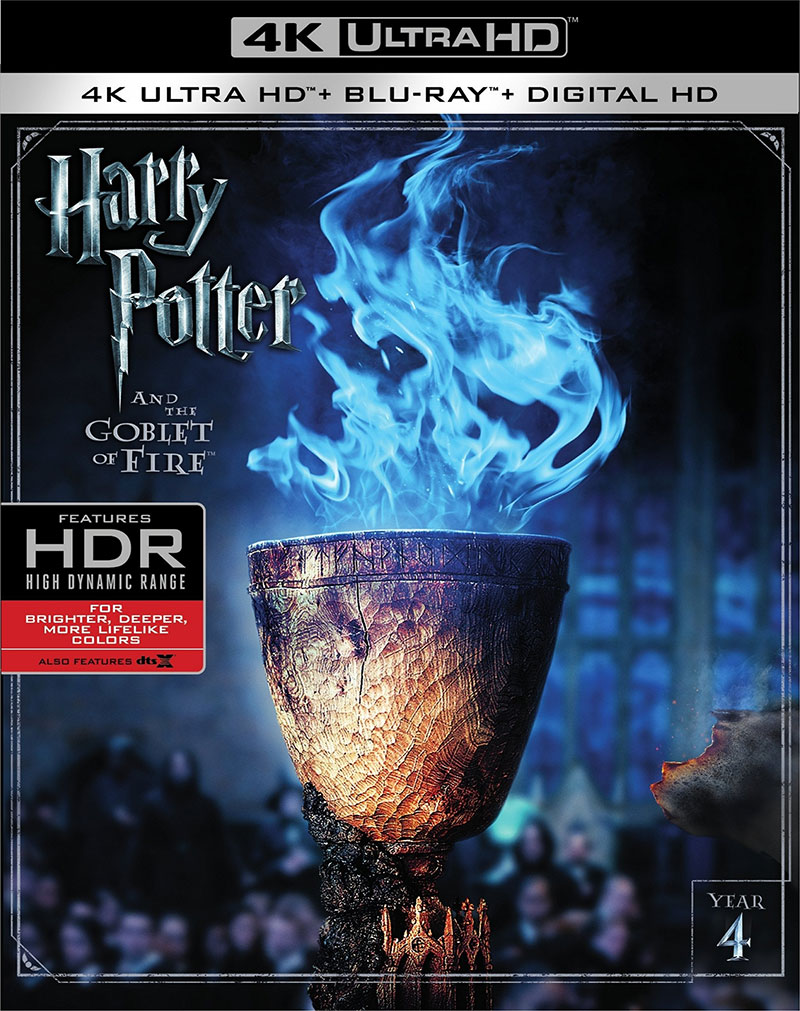