I am a huge fan of Joe Dante’s films, having grown up watching Matinee and The Burbs countless times. Although Joe Dante may not be a household name, for film collectors like myself who grew up in the Eighties and Nineties, he holds a special place in our hearts. Some background information about Gremlins – the film was released on June 8th, 1984, which is odd considering that the film definitely can be considered a Christmas movie. My big sister Chase went to see the film in the theaters with my mom and she was very young. The cute picture of Gizmo on the poster did not allude to the violence in the film. When a certain scene involving a microwave occurred, my mom and sister were mortified. They left the theater shocked. That shock cemented the fact that I would not be allowed to watch Gremlins as a child. When I finally watched it, I was fully grown up and had a child of my own. I had honored my mother’s request for roughly thirty years before I sat down and watched it. As I watched the film, I was thrilled to see how clever, ridiculous, and fun the film was. The violence was far less graphic than I had been led to believe and I went on to show it to my oldest son, Holden. When the microwave scene happened, he laughed as hard as I did. A true bonding experience between my child and my inner child.

An inventor (Hoyt Axton) arrives at a small shop in Chinatown. He attempts to sell his gadget – the bathroom buddy. It is basically a Swiss Army knife of bathroom gadgets. The old Chinese man is not sold on the invention as he puffs his pipe. They overhear a creature in the store called a mogwai. the mogwai is kept in a box out of the sunlight and sings a song. The inventor offers a couple hundred bucks for the mogwai to give as a gift to his son for Christmas. The old man refuses to sell the mogwai. His grandson, dismayed that his grandfather would turn down that sum of money, meets the inventor around back and sells him the mogwai. He warns the inventor to keep the mogwai away from water, keep it away from sunlight, and no matter how hard it begs – do not feed it after midnight. In the small town of Kingston Falls, as it prepares to celebrate Christmas, a young cartoonist named Billy Peltzer (Zach Galligan) works for a bank instead of following his passion for drawing comic strips. At the bank he works with the politically active and beautiful Kate Beringer (Phoebe Cates.) The despicable grouch Mrs. Deedle frequents the bank which she essentially controls. She makes a scene at the bank regarding Billy’s dog, Barnie. Billy loses his job at the bank when the dog lurches at her from below Billy’s desk. Coming home, Billy’s dad, the inventor from before, arrives with his gift. Billy meets the tiny cute creature that has been dubbed Gizmo. Gizmo and Billy immediately bond. When a local kid comes over named Pete (Corey Feldman,) they accidentally spill some water on Gizmo. This causes Gizmo to multiply. Soon there are numerous mogwais, but they are not as kind spirited as Gizmo. When the rules are all broken on accident, the mogwais mutate into evil gremlins that wreak havoc on the small town. They are led by an evil gremlin named Spike with a white stripe in his hair. Hilarity and chaos ensue as Billy and Kate team together to save the townspeople from the devious creatures as they run amok.

This film has everything: Drunk cops, character actor Dick Hill in one of his best small roles, hilarious puppets that drink alcohol, shoot guns, and smoke cigars. If you don’t laugh hysterically at a stairlift chair flying out of a window at high speed, then you are not the core demographic for this film.

The film was written by Chris Columbus. This was his breakout script that he followed up with The Goonies. I can’t imagine writing two seminal films in my lifetime, but Chris Columbus had these movies produced within a year of each other.  He went on to become a successful director in his own right – directing Home Alone (which was my favorite film as a six-year-old.) Gremlins has a fantastically inventive script. The characters are lovable and when the town is completely overrun with the evil gremlins, the film becomes a madcap extravaganza of sight gags. The love that Joe Dante feels for the old Looney Tunes cartoons comes across in every frame of the picture in the final half. Very few movies make me laugh out loud from a visual gag. Gremlins consistently made me laugh with the situational comedy that the puppets enact.

The central performances in the film are nicely done. Zach Galligan went on to star in the fun Waxwork film series which is a great B-movie series. He always played the underdog pretty well. Phoebe Cates is always nice to watch onscreen and continued her girl-next-door streak that had won over boy’s hearts in films like Fast Times at Ridgemont High and Private School. There are some great supporting cast in the film also. Corey Feldman and Hoyt Aston do well in the film. I already mentioned Dick Hill, but there is also a fun cameo by Judge Reinhold. Everybody approaches the material correctly.

Gremlins is a blast. The film still has a devoted following thirty-five years since it was released for a reason. I consider it to be one of the funniest family films to ever be released and fans of Joe Dante will adore it. There are not that many family films that I re-watch every year, but this film makes the cut.

This is one UHD presentation that I had been extremely excited about. There are very noticeable improvements over the unimpressive and outdated Blu-ray from 2009. Fine detail shows vast improvement. Keep in mind that the film is visually fairly reserved with brown, grey, and muted colors for the most part. For collectors like myself, the old disc will become a frisbee. That said – is this UHD impressive on par with the amazing presentations we have seen on newer films or Close Encounters of the Third Kind? Not so much. But fans of the film are going to be excited to finally have a truly quality release of this classic film.

Though this is a “next generation” format, the same DTS HD Master Audio soundtrack from the Blu-ray persists here. There is a bit of a “hiss” in the dialogue, thereby dating the film a bit. It’s not like that of movies from the 40’s and such, but you would hear it and could tell that it’s an older movie. Surrounds were used occasionally, but not enough to really make the track stand out. There are a few moments that stood out, but with a movie that’s nearing 40 years old, it’s understandable that it won’t hold a candle to some of the modern-day releases.

Gremlins is one of my favorite films from the Eighties. It has stood the test of time and really just makes me laugh. It also is a fun Christmas movie to throw into the mix. My boys and I love it and I was so excited to finally upgrade my Blu-ray copy. This UHD disc features a fantastic looking 4K transfer along with some exceptional supplements from the Luxe Blu-ray edition that was released in 2014. With a strong looking transfer from a new 4K scan, fans will want to purchase this collector’s edition immediately. 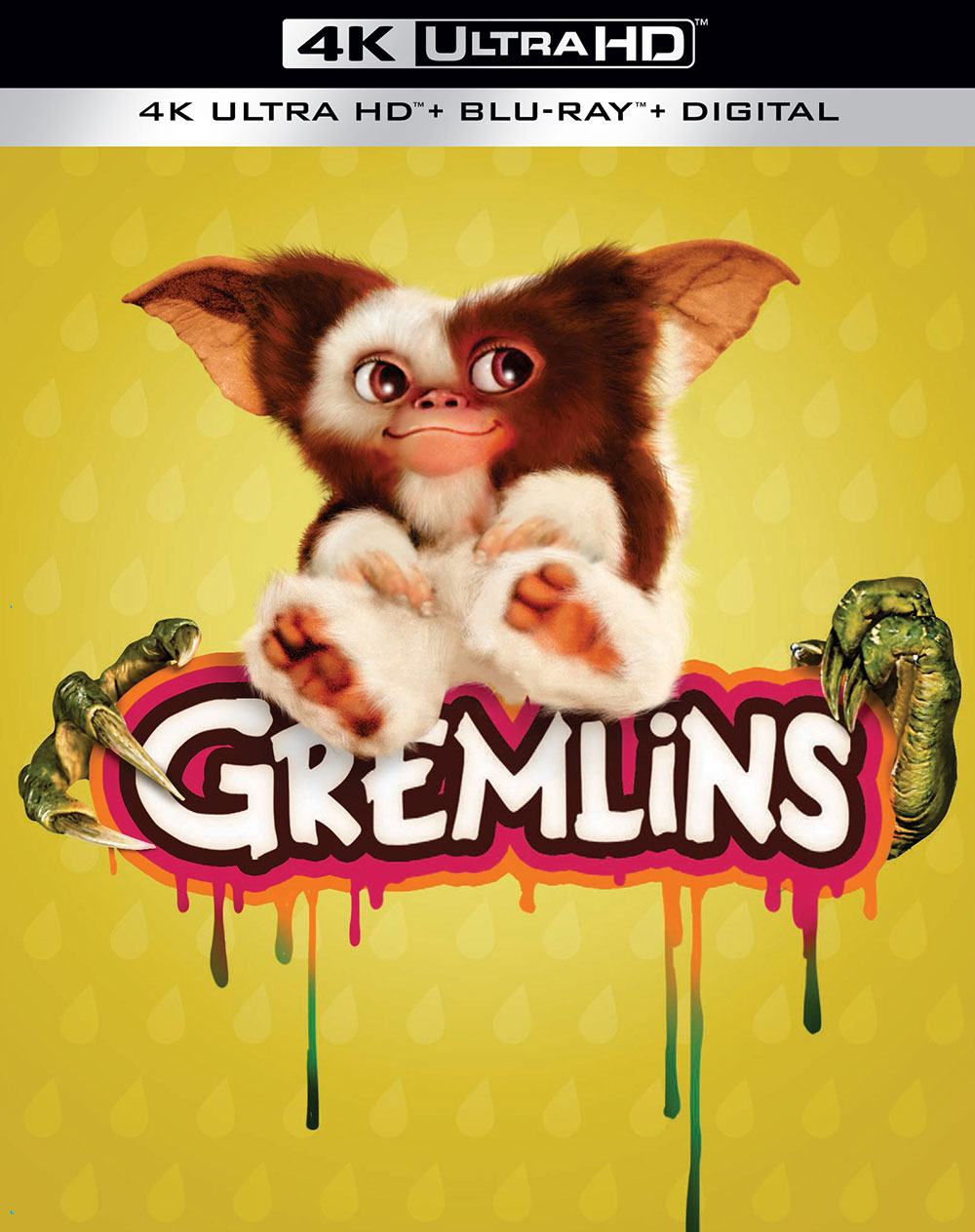