After a nuclear test on a remote island, a normal lizard is transformed into a mythical beast of harrowing proportions, GODZILLA (insert echo). Aboard a huge fishing boat, a crew of Japanese fishermen is thrown into the sea after Godzilla smashes their ship. Godzilla makes his way through the ocean, and all the way to The Rotten Apple, where he decides to crash for awhile. I mean, New York, is the city that never sleeps, but I would stay awake if there was a huge lizard wandering in my city. Anyway, a animal researcher (Matthew Broderick) is called in to help keep Godzilla under control, and get him out of New York. A small back-story brews about Broderick and his old girlfriend, but what the real draw of this film is, is the smashing and trashing of the Big Apple. Godzilla vs. New York. Does size matter?

Godzilla had a massive media blitz, promising huge thrills and an epic film for the ages. Well, it’s not an epic, and it’s not an AFI 100 candidate by any means. It delivers on the thrills part of the hype however, giving us a few, but not enough, scenes with Godzilla wreaking havok throughout the city, knocking buildings to the ground, squashing cars and people, and doing that cool-ass growl of his. The effects in this film are excellent, but not very often. But when they are done, they are done very, very well, as should be expected from Dean Devlin and Roland Emmerich, who also did Stargate and ID4. While the effects are fantastic, the story could use some work. The whole love story between Broderick and his old flame seems out-of-place, and slows the movie considerably. The movie would be much better with more Godzilla, less mushy stuff.

Godzilla is a franchise, and even in this big-budget version, it still seems campy, which is not at all a bad thing. It is a very fun movie, and is watchable many times, but only if you like it the first time. While it is not deep on believability, why should it be? It’s Godzilla, not Amistad for Pete’s sake. The supporting cast is very good, featuring Jean Reno, Maria Pitillo, Hank Azaria, Michael Lerner, Harry Shearer, and Kevin Dunn. While not the greatest of acting, it’s better than any cast in a Godzilla flick before this one. The main reason to watch this is Godzilla, the lizard himself, and the chaos he creates. This is a special effects movie, pure and simple. So, look elsewhere for brain-busting plots, and stay with the big green guy for great effects and alot of fun.

A new 4K transfer was made just for this disc and it shows, on the most literal level. There are a lot of challenging scenes in this film with rain, nighttime shots with lots of action. It’s all handled with the greatest of ease. And while the image is still quite nicet, he print is clean and polished and displays strong clarity throughout. Flesh tones and facial features remained strong as well. While some of the effects are a bit dated (we’ve come far since ’98), that’s no fault of the transfer itself. It’s simply presenting the film as it is. I think fans will be pleased. It’s an improvement over something I didn’t think could be improved upon.

The previously-released Blu-ray (and contained in this package) featured a pretty amazing DTS HD Master Audio soundtrack. That’s been put out to pasture and replaced by a new Dolby Atmos track which, as expected, turns the volume up to an 11. The splashing of the rain and havoc done to the city comes through strongly here. There’s a solid boost throughout the track and that certainly helps matters here. Vocals are clear sounding with no issues, but let’s face it, the action is what you’ll be most excited for. There’s strong clarity and plenty of depth to this track. No issues here.

The 4K disc only contains a couple of trailers for the film, while the Blu-ray has the rest of the supplemental features (below).

Sony’s presentation of Godzilla is, by far, the best it’s ever looked and sounded. I’ve never been too much a fan of this particular version, but there are plenty who are. Sony continues to lead the pack when it comes to their 4K releases and this is no exception. 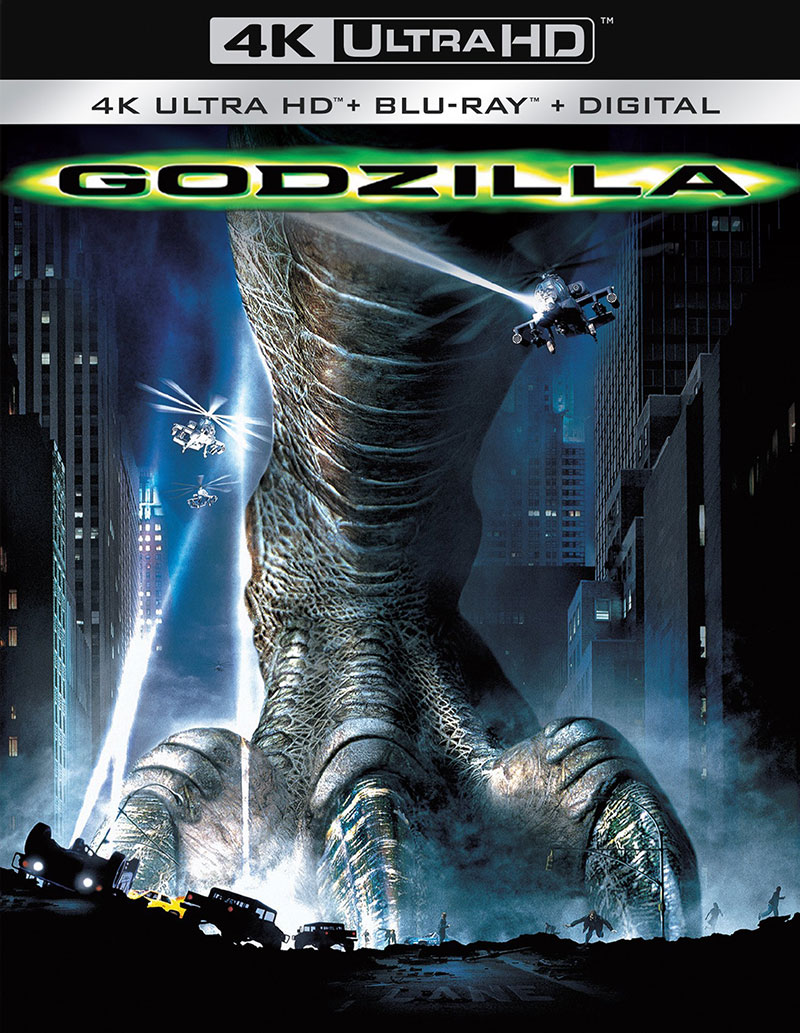