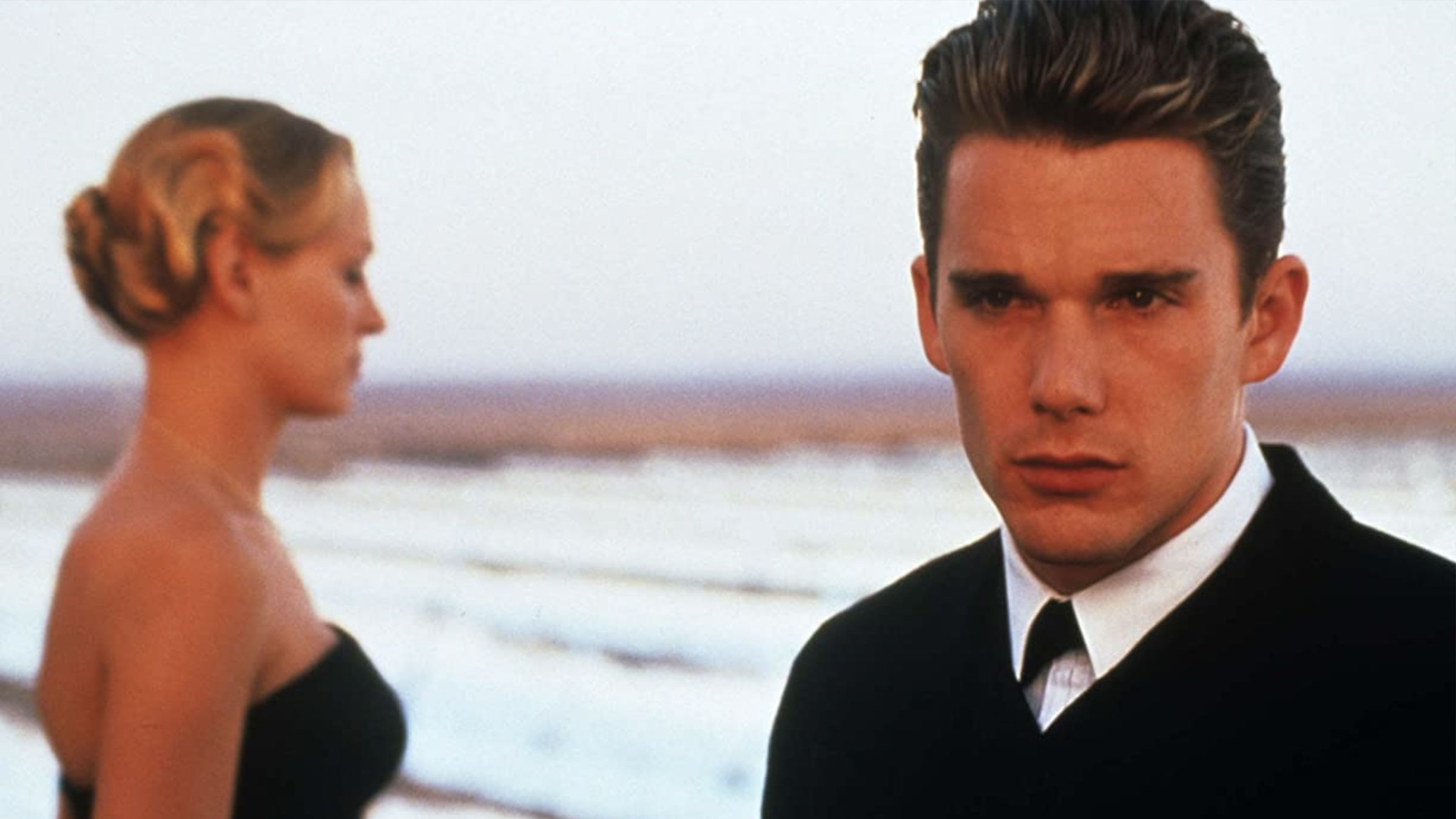 Vincent Freeman (Ethan Hawke) has always dreamed of going into space, even back when he was a young child. But the odds are very much against that, as Vincent is prone to heart problems, genetic flaws, and perhaps even a premature death. His brother Anton however is not, since he was engineered to avoid those problems, therefore making his life’s path an easier one, while Vincent struggles to even find honest work. The world has become discriminate against “natural” citizens and chooses to give the breaks to those created with flawless genetics, even if they’re not the best people for the tasks. But he has refused to give up and when he turns to underground sources, he discovers a remote chance exists. He can assume the identity of Jerome (Jude Law), a genetic marvel who was crippled in an accident, but no one is aware of this and he has remained in hiding. The process will be harsh, extreme, and constant, but if Vincent wishes to live his dream, this is the sole path to take…

This film was never given much hype or exposure, which is a true shame, as it is a beautiful, very memorable motion picture. Gattaca has a story that makes you think, visuals that you could get lost in, performances that keep you interested, and direction that is so tight, not a single second is wasted on screen. This all combines to create a compelling & poetic movie that resonates long after the credits have rolled, a rare thing in modern cinema. The pace remains slow, but never drags in the least and this allows the details to unfold in a proper manner, no rush is applied at any point and that ensures the emotional impact is intact. But as interesting as the story is, you can sometimes just drift off into the visuals, which reinforces how strenuous it is for our main character, who could lose it all, should his mind wander too much. It is hard to believe this was made for as little money as it was too, since it looks and feels like a big budget picture. If you’re looking for a powerful, well-produced movie that will do more than entertain you for ninety minutes, give Gattaca a spin and of course, this Superbit edition is the best venue to do so with.

I’ve enjoyed several of Ethan Hawke’s turns, but without a shadow of a doubt, this stands as his finest performance. I admit that I was skeptical the first time I viewed Gattaca, but Hawke is tremendous and nails this role in all respects. Yes, he has some incredible material to work from, but I think a lot of the role’s success is also to do his approach. He never overplays the part and while he could do so at times, he holds back and that enhances the character tenfold, I think. The intense nature of the role makes it tempting to see him go over the top, but his natural, restrained vision remains firm, just as it should. Other films with Hawke include Snow Falling on Cedars, Alive, Reality Bites, Mystery Date, White Fang, and Before Sunrise. The cast also includes Jude Law (Immortality, Enemy at the Gates), Uma Thurman (Beautiful Girls, The Avengers), and Xander Berkeley (Shanghai Noon, A Few Good Men).

I have to admit that for as much as I’ve enjoyed the film, it’s never really impressed me with the way it comes across on screen. That’s a bit misleading as it’s a beautifully-shot movie, it’s just been plagued by a rather dingy transfer over the years. So, with this new 4K offering I was hoping that it’d finally get the love it deserved. It did. The 2.40:1 HEVC 4K transfer for Gattaca is the best it’s ever looked. The HDR really turns it up a notch and gives us those deeper, darker blacks that gives the movie an almost different look. I found most of the scenes to be very clean and clear with an improved level of detail. In essence, everything that was wrong with the previous versions has been fixed here. This transfer is not an invalid.

In addition to the video looking very smart, we get a new, upgraded audio track as well. Gone is the Dolby True HD offering from the Blu-ray (though, obviously, it’s still present on the included Blu-ray) and it’s been replaced by a new Dolby Atmos track. Its a strong soundtrack, but nothing too over the top. Dialogue and vocals seemed to be clear and during some of the more action-oriented scenes, the surrounds really came into play. Gattaca has never really had a superb soundtrack, but the atmospheric Dolby track does bump it up a notch or two. It’s a slightly nuanced more organic feeling aura than a “bang and blast” action film. It’s fitting for the theme of the movie, for sure, but it’s nothing that will leave an impression on you.

This two disc set only contains one extra on the 4K disc, the rest of the supplements are found on the included Blu-ray.

Gattaca was a great movie-watching experience when I saw it in theaters back in 1997. Nearly two and a half decades later it’s one I still watch on an annual basis. The theme of the film is timeless and even inspirational after all of my viewings. This 4K version is, by far, the best the film has ever looked and the addition of a new Dolby Atmos track only sweetens the deal. It’s a shame that no new supplements are included, but for those interested in the technical aspects – this delivers.