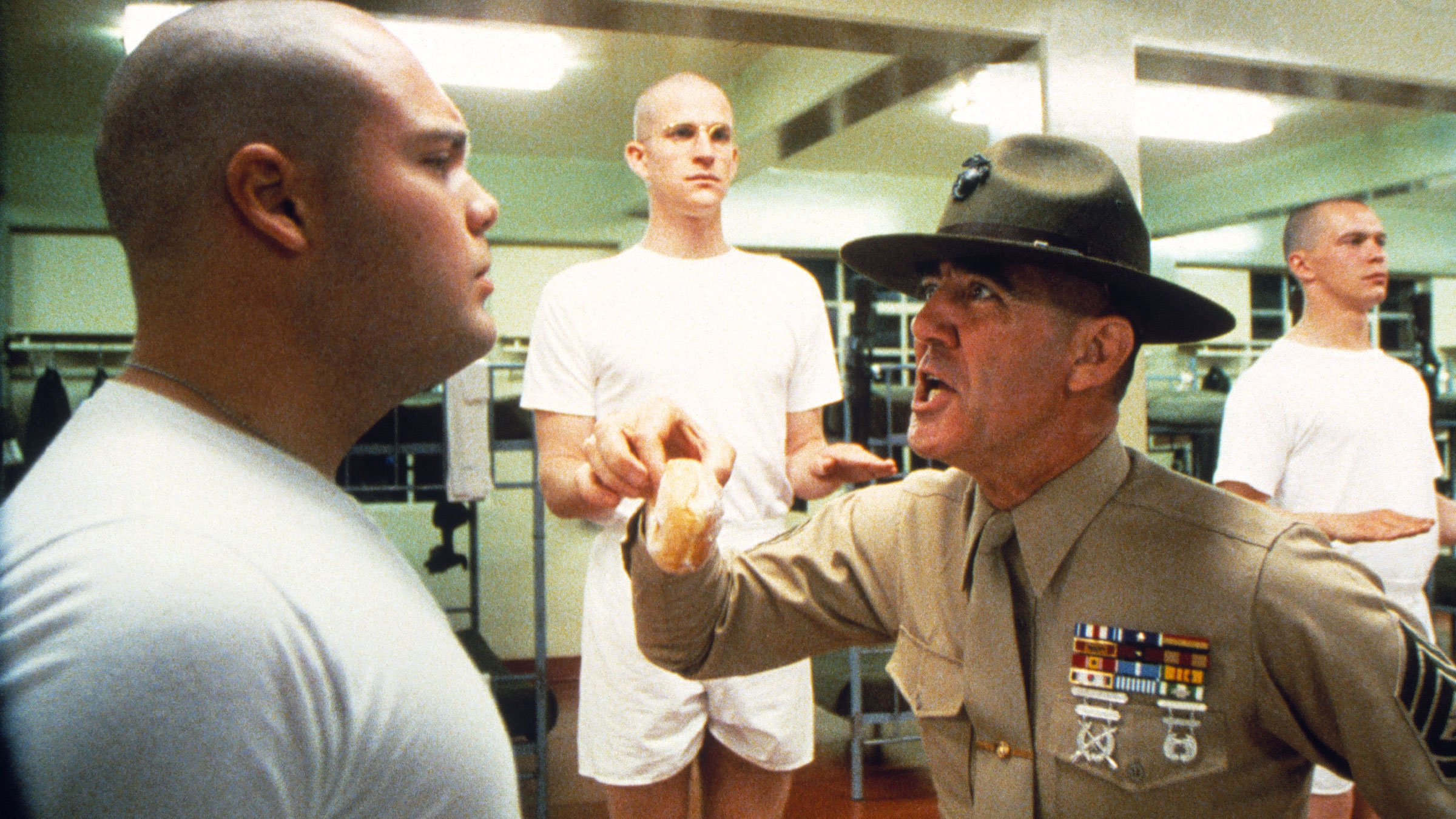 As a band of young soldiers enter basic training before being shipped off to Vietnam, they have no idea what awaits them, both now and once in Vietnam. The men are instructed by Sgt. Hartman (R. Lee Ermey), a loud and cruel drill instructor who has little patience and runs his unit hard, as he feels it should be done. The new recruits include rebellious Private Joker (Matthew Modine), determined Private Cowboy (Arliss Howard), and of course the resident slacker, Private Pyle (Vincent D’Onofrio). As they endure abuse from Sgt. Hartman, they also must push themselves to new limits, to become killing machines above all else. It seems the unit has solid potential, but when Private Pyle begins to fall behind, Sgt. Hartman makes his failure the unit’s failure and as such, Pyle is punished by his own fellow members. Joker decides to do what he can to push Pyle ahead and help him improve, but the pressure seems to be getting to both men, as well as the rest of the unit. If basic training has taken these men to such depths, what will happen when they’re shipped off to Vietnam, where even harsher conditions await?

This is one of the most unique and memorable war movies of all time, thanks to Kubrick’s surreal approach to the material. I would rank it close to Platoon and Paths of Glory as one of the best war flicks in fact, I like it that much. I happen to think both the training and battle sections work to perfection, but some feel the final half doesn’t match the first, which I can see from a certain perspective. This movie has the usual war elements, but with some dark comedy added in, as well as surreal moments, though neither stands out as forced. In other words, this is a well crafted motion picture that hits the mark, never slipping much on the path. The cast is excellent and includes such names as Matthew Modine, Vincent D’Onofrio, R. Lee Ermey, and Adam Baldwin. Kubrick’s direction had to be tough to endure on this film, given the nature of the characters and volume of extended scenes, which makes the performances that much more impressive. I was very let down by Warner’s original release of this film, but the new restored & remastered edition here is a real treat and as such, comes highly recommended.

I don’t often find myself too impressed by Matthew Modine, but in this film, he won me over and showed his true potential. As the central character here, Modine must be our guide through the experience, especially the mental and emotional portions. He seems to fare very well in the later segments, but he shines when he first arrives at basic training, fresh off the boat, so to speak. I am surprised Modine was able to make the transitions needed with such effectiveness, but he does and as such, I have to give him much credit indeed. I don’t think he’s been too good since however, with a sparse amount of standout performances, but his work here is nothing short of excellent.

This title has been through the ringer when it comes to previous home video format. Warner has released this a few times on Blu-ray as well as some former offerings in HD-DVD and, of course, DVD. The older DVD’s were shown in a 1.66:1 aspect ratio, but they’ve settled for a 1.78:1 HEVC 4K image here. As expected, this is far and away the best the film has ever looked. Increased color depth, the detail seems more finely-tuned and any grain has been removed. It’s a world of difference from some of the earlier offerings. Kubrick, a photographer before he became a director, really knew how to frame a shot and it’s evident here. I’d forgotten how amazing this film looked and the improved picture only adds to the allure. This is a top notch effort.

As with the picture, the audio has had a varied past as well. The other editions have had a Dolby Digital mix, a Dolby True HD mix and of course the purists’ choice – a mono mix. For this new 4K edition Warner has given us a DTS HD Master Audio mix and a restored mono one as well. That’s good news and should satisfy the masses. I chose to listen to the DTS mix and wasn’t disappointed. Granted, it can’t hold a candle to some of today’s modern mixes, but I found a fullness and depth that I’d had ever experienced while watching this film. But if 6 speakers are a bit too much, the included mono offering should more than satisfy.

The 4K disc is the movie only and the included Blu-ray carries over the same supplements as the previous disc.

This is arguably the best movie about Vietnam ever made. It’s not an easy watch, but it’s well worth. Warner’s 4K offering ups the ante with improved picture and sound and the inclusion of a mono track is most welcome. Fans of Kubrick shouldn’t hesitate to add this to their collection.