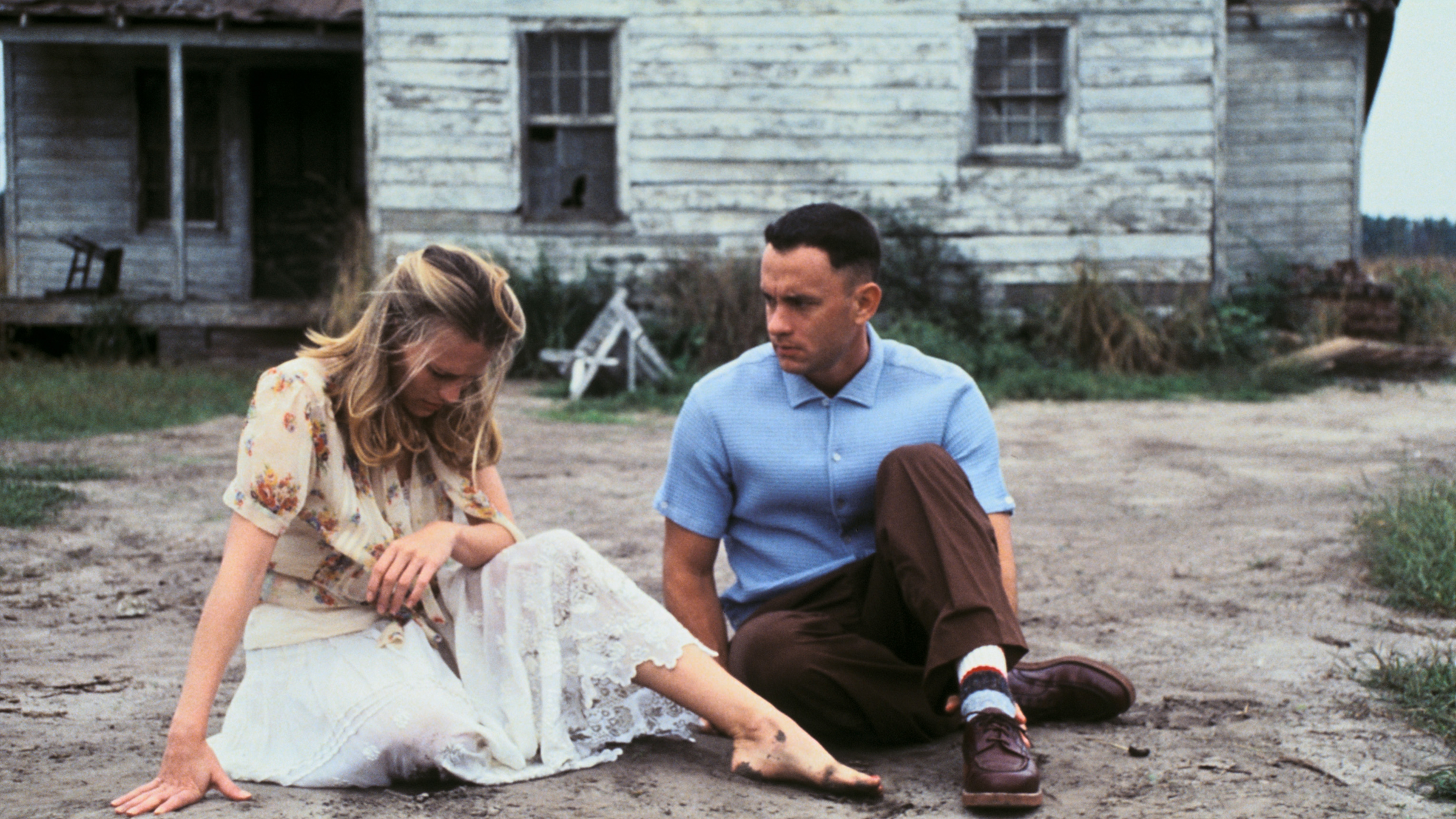 It’s been fifteen years since I first saw this movie. I had read reviews of it and it being a hot Summer day, I went with my family to see this movie about a man named Forrest. I had seen previews, but the general jist of what I thought the story to be about was that he had braces on his feet and he wasn’t that smart. I was prepared for a sad movie…A mere two and half hours later, I walked out of the theater having seen one of the greatest movies in my entire life. Forrest Gump is a movie about a man who is stupid, yet he never does anything stupid at all. This was Tom Hanks’ follow-up to his Academy Award winning role in Philadelphia, and it’s no surprise that he won back to back Oscars for his role as Forrest Gump. So what is so special about Forrest Gump? Aside from the fact that he seemed to have a brush with most every major political event of the last half century, it was an approach to making a movie that we had never seen before. You could go and say that someone met JFK, but this movie actually shows the character shaking his hand and interacting with him. Unreal. Or real? While Forrest Gump has received its share of acclaim, there are those out there who don’t like it. That’s fine. With a movie as popular and as commercially successful as this, it’s bound to garner acclaim as well as criticism. Many feel that Quentin Tarantino’s Pulp Fiction should have received the Best Picture nod instead of this. But once the votes were cast, it was a man named Gump who stood triumphant.

As the computer-generated feather falls across the skyline of Savannah, Georgia, we can barely make out a figure of a man sitting on a park bench. He is dressed in a suit, dirty old Nike’s and carries a briefcase. This is Forrest Gump. Once you get past his accent and listen to what he says, it makes the story a lot more enjoyable. Forrest is telling his life story on a park bench, to almost anyone who will listen. But, as it turns out, Forrest has led quite the life so far. Forrest’s mother, played by Sally Field (who ironically plays Tom Hanks’ love interest in “Punchline”) is trying to get Forrest into school. But the “Progressive” system of Alabama doesn’t let people with an IQ lower than that of 80 into the system (Forrest has an IQ of approximately 75), but after a little coercing by Ms. Gump, Forrest is enrolled. It’s about this time that he meets the one person who influences him the most, Jenny. Jenny has had the cards stacked against her for a long time. Her alcoholic dad beats her and her siblings leading Jenny to pray to find some escape from her tortured life. We then flash forward a ways when Jenny and Forrest are in high school. It’s the same story, but when Hanks takes over, the movie really doesn’t go downhill. Jenny’s advice to Forrest has and always will be “RUN, FORREST RUN”. The movie follows Forrest through his journeys. He graduates from high school, and as he’s running away from the local hicks, gets recruited to play football at the University of Alabama (under Bear Bryant no less), manages to make national headlines when he is involved in the integration of the University and that’s just while he’s in college.

The movie takes on a different tone when Forrest joins the Army. Being a buck private, Forrest fits in the Army “like one of those square pegs, or somethin’…”. And it’s not long after that he meets his best friend, Benjamin Bufurd Blue (aka “Bubba”) played by Mykelti Wiliamson. Bubba comes from a long line of shrimp boat captains and his only dream is to own and operate a shrimp boat business after he gets out of the Army. But Vietnam changes all of that. Throughout Forrest’s journeys in the army, he meets another friend by the name of Lieutenant Dan (Gary Sinise), who is another influence on Forrest’s life. Though Forrest has received the Congressional Medal of Honor, been in China to represent the United States in Ping Pong and spoke at the reflecting pool in Washington to some 50,000 people, his life is still just starting…As we marvel at the life of Forrest Gump, we can’t help but wince when we see Jenny. Jenny has moved from town to town, been kicked out of her college for posing for Playboy and is heavily involved in the “Sex, Drugs Rock N’ Roll” scene of the 1970’s. It’s only after she comes home to Alabama and to Forrest that they start a life together.

The life of Forrest Gump, just like the movie, is almost too unbelievable to explain. It’s humorous to see how many key events Forrest was part of (though it’s all fiction), and how the movie seems to make it work. It’s a testament to Zemeckis’ great direction as well as another great performance by Tom Hanks and a great supporting cast. Without a doubt, Forrest Gump is one of the best movies that I’ve ever seen. It’s one of those rare treats that Hollywood can’t seem to crank out much anymore, but this little gem should find a good place in your library.

It’s a good thing when a studio releases some of their top shelf catalog titles and with Forrest Gump, you can’t get much better when it comes to Paramount. Still, the still fledgling format has a ways to go and it’ll need the support of the studios to not only release some good titles, but do a good job with them. Watching the film on 4K, I was instantly taken back to the first time I saw it in theaters. The CGI feather falling across the skyline of Savannah and so forth. The 2.35:1 HEVC 4K image does improve on what the Blu-ray (also included) showed, but there are a few instances in which I was less than impressed. Granted, I’ve seen the film in every format out there, so little nuances do and will stand out. The best way to describe this presentation is inconsistent. It’s not “bad” by any means, just not the shining example of 4K that I’d hoped for. Colors are bold and vibrant, detail is immaculate and the additional depth provided by the HDR really does make this look, in parts, the best the film has ever looked.

I explain this below as to the “why”, but if you’re looking for the best-looking Blu-ray, then this is it. While it lacks the HDR of the 4K disc, there is a noticeable difference in the way this looks. I found the previous Blu-ray to be a bit more “grainy”, though still looking much like the film I’d seen in theaters as well as various home video formats. This new version features a bit more contrast and appears a tad bit darker, yet warmer (if that makes sense). Detail has been improved a bit as well. I’ve said most everything that applies above, but this is the best-looking Blu-ray to date. But when a 4K copy exists, why go there?

Gump has gotten an upgrade when it comes to sound. The previously-released Blu-ray featured a pretty robust DTS HD Master Audio soundtrack, but we now have a full on Dolby Atmos mix that ups the ante. As anyone who’s seen the film knows, music plays a big part in the film (more on that later) and the 40 some odd songs blend in seamlessly to the film adding life and even depth to the plot. The Vietnam sequence sounds as amazing as I expected it, right about the time it stops raining and Gump’s platoon gets ambushed. The speakers are alive with action for about the next ten minutes. Amazing. Dialogue is clear and crisp and though not all of the film can sound like the war scenes, Forrest Gump has the depth to make it stand out as a top notch disc.

I’ve had some head-scratchers when reviewing discs, but this one just might take the cake. Ok folks, before we dive into the supplements, let me straighten a few things out…

In 2018 Paramount released Forrest Gump as a 4K disc (feel free to read our review). In it was the previously-released Sapphire Series Blu-ray from 2009. The 4K disc looked good, not great, not outstanding but good. We gave it a 4/5. You’d have thought that someone at Paramount might have said “why don’t we just wait until next year since it’s the 25th anniversary of the movie?” That person probably got fired. Well here we are, a year later, and now we’ve got another Blu-ray and 4K offering.  But here’s the hook…the 4K is the same disc as last year. The only thing that’s changed is the Blu-ray. It’s been remastered (see our comments above). So if you own the previously-released 4K disc, there’s no need to get this new 4K offering unless you want the remastered Blu-ray. But if you want the remastered Blu-ray, then what the hell would you buy a 4K disc to begin with? Honestly, I really don’t know how studio execs get (and maintain) their jobs.

There are classics and then there are films like Forrest Gump. While it’s nice to see the movie come to the new format, the new 4K transfer leaves a little to be desired, but it’s not really as bad as I (and other sites) make it sound. The lack of no new supplements is a bit disappointing, but given what has already been available – I don’t know if more exist. The new Atmos soundtrack takes it up a notch as well.

This is a difficult recommendation. On one hand if you don’t own the movie on 4K and want the “definitive” version, this is it. On the other hand if you bought the 2018 4K version, I see no reason to “upgrade.”