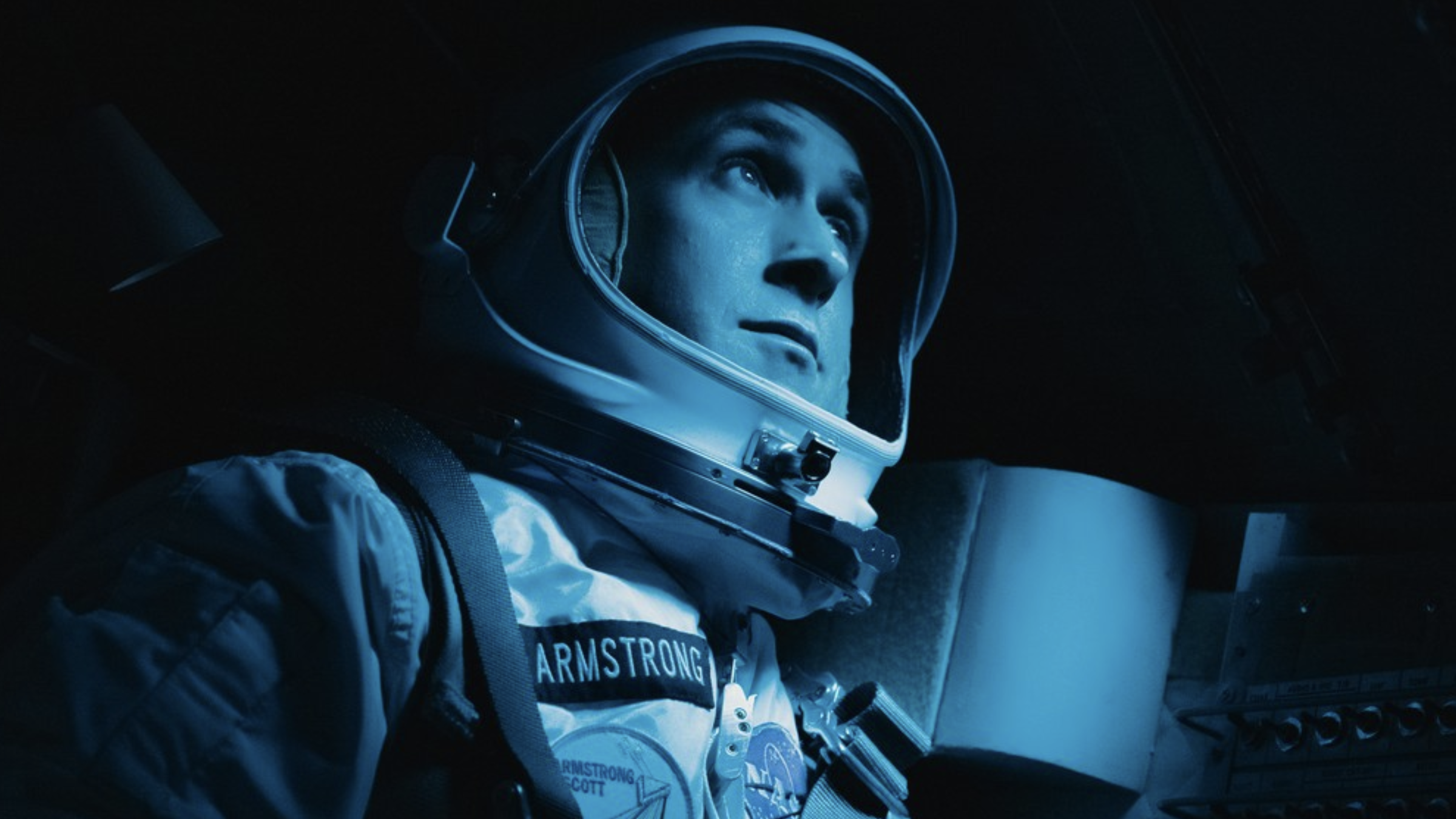 One of the more notable events of the 20th century is one I’m too young for – man walking on the moon. Conspiracy theories aside, it really was a remarkable feat and, cliché aside, was a giant leap for mankind. Not only was it one of the major factor in the Americans versus the Russians (and a major lynchpin in the Cold War), but it showed what we could do if we really set our minds to a goal. That and endless funding probably helped. But all this would have been nothing if not for the brave men who volunteered to become astronauts. Many died along the way. With First Man, director Damien Chazelle focuses on one man – Neil Armstrong. If you’re looking for an all-encompassing movie about the space program, check out The Right Stuff. It’s amazing. But fans of Chazelle (Whiplash, La La Land) or Gosling will want to turn their focus to what happened on a day in July 1969.

We meet Neil Armstrong (Ryan Gosling) as he and his wife (Claire Foy) lose their daughter. Armstrong, a pilot, is motivated to apply to NASA and join the space race. This is his story.  Essentially everything that happens is seen through his eyes, similar to Miles Teller’s character in Whiplash. There are familiar names along the way and we meet (and see a few of them depart) along the way. Armstrong is cool, collected and about as introverted as any film subject I’ve ever seen. He was not hired for his communication skills and Gosling plays that to perfection. We see various missions and space explorations along the way and anyone who took history in school knows the outcome of the film – he walked on the moon. Playing the somewhat typical WWAH (worried wife at home) is Claire Foy, but she manages to make the most of her part and in a way that’s natural and realistic.

I wasn’t quite sure what to think about this film before my viewing. I’d heard and read good things, but it manages to avoid some of the clichés we’ve all been accustomed to. It’s more of a character study of one of the 20th century’s most important people – Neil Armstrong. Chazelle’s direction is top notch as it has been (and most likely will be) in other films. I’d had no idea of the talent involved in this film until watching the special features. Names from the past, man, Lukas Haas, Patrick Fugit, Ethan Embry and some faces we’re familiar with: Kyle Chandler, Corey Stoll and Jason Clarke. All in all, this is a somewhat subdued look at the race to walk on the moon, but it’s told in a fashion that kept my attention for the 140 minute running time.

First Man is an interesting-looking film. It manages to avoid all of the pratfalls and special-effects laden films and instead gives us a near POV experience through the eyes of Neil Armstrong. In doing that, it creates a very personal connection with the viewer. Yes, we experience the film and what he’s seeing through his eyes. It’s a remarkable concept when done right. Taking a step back and looking at the physical picture I was viewing, Universal’s 4K disc drives it home with an impressive-looking 2.39:1 HEVC 4K image that shines. There are some sequences, particularly the moon landing, that were shot in IMAX and for that reason along I’m kicking myself for not seeing this on the big screen. The movie uses an array of practical and special effects that are so seemlessly blended together, it’s hard to tell what’s digital and what was done with good, old-fashioned movie magic. And that’s the point. The skies turn from blue to black, zero gravity takes over, and so on. There are even some specs of grain in some of the scenes.  You know what that means? A film that takes place in the 60’s doesn’t have to look like it took place in the 60’s, but there is another layer of authenticity if we feel it’s not a modern movie. Make sense? Suffice it to say that when watching this on your xx inch HDTV, the results are breathtaking.

Viewers will be treated to a remarkable Dolby Atmos soundtrack that, at times, shook my room. Granted I did have it turned up a little more than I should have, but with a movie like this I felt that it was the right thing to do. I found it odd that vocals took somewhat of a backseat here, it’s not that they’re bad, but Gosling’s performance is so understated, I found myself leaning in to hear what was being said. I don’t fault the disc itself. There are a few scenes in the space capsule that are mesmerizing: sounds that create such a realistic 360 soundstage I felt dizzy (and I can only imagine how the real astronauts felt). It’s quite the experience and this is one that the volume should be turned up for. A top notch effort.

This is a tough one to call. By no means is this a bad movie, but I feel for those that are expecting an action-packed film (like Apollo 13), then they might be let down. Damien Chazelle’s films are a different breed and they require commitment. I found Gosling’s performance phenomenal, if understated and I have to imagine that it was true to how Neil Armstrong was in real-life. Universal’s disc both looks and sound great and there are enough supplements to certainly warrant a purchase.