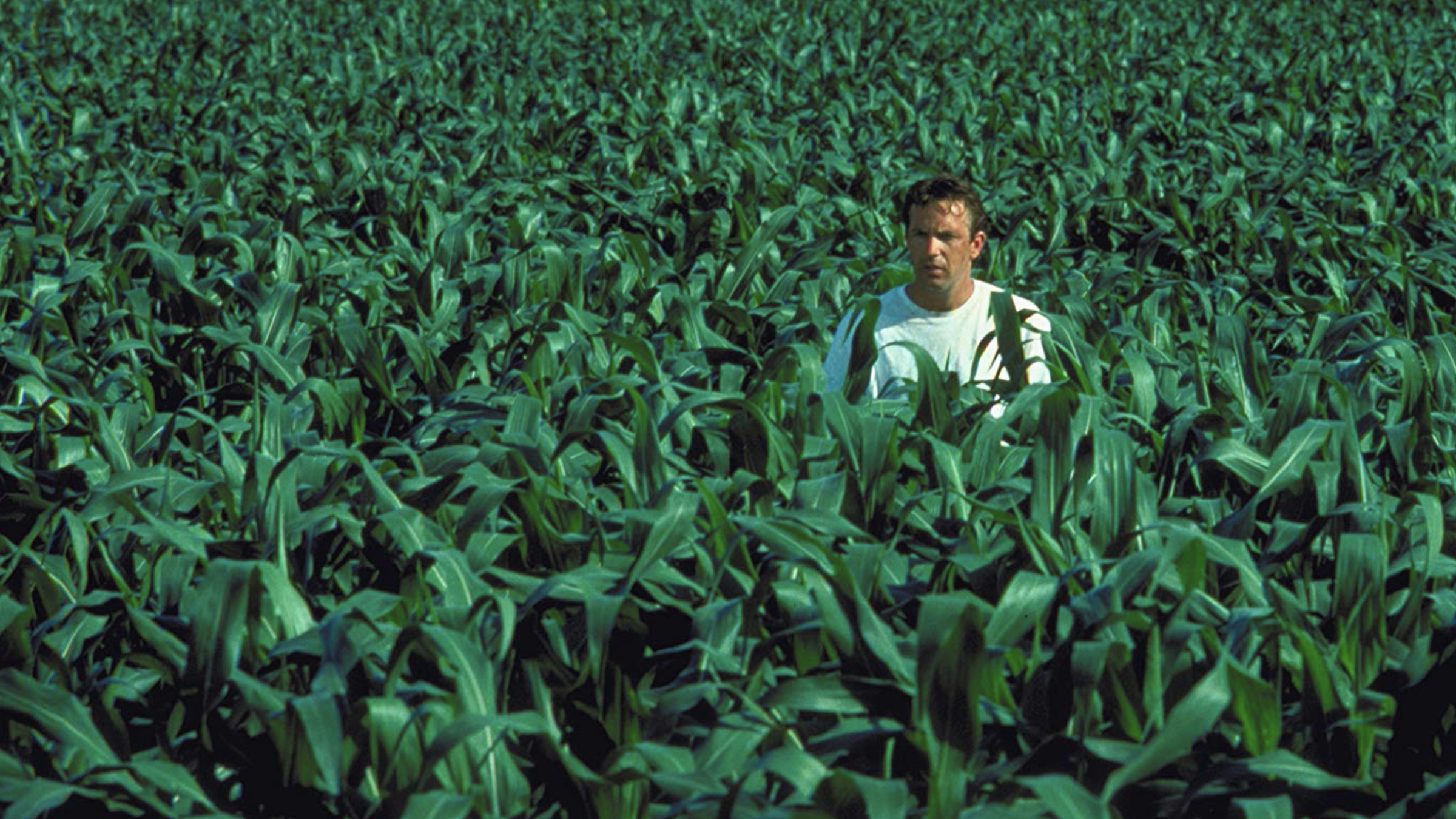 Ray Kinsella (Kevin Costner) has been inspired before, as he looked up to the baseball greats of his youth and would later become an activist in the 1960s, inspired to make a difference. These days, Ray lives a simpler life as a farmer in Iowa. He lives on the land with his wife Annie (Amy Madigan) and young daughter Karin (Gaby Hoffman), working the corn in his fields. He is by no means an expert in this craft, but he works hard and tries to make things work. As he works in the field, he hears a voice whisper to him, that if he builds it, they will come. A cryptic message to be sure, as Ray has no idea what “it” is or who “they” are, not to mention the voice doesn’t seem to belong to anyone. He consults some locals, but they begin to think he has lost his mind, hearing voices and what not. He soon understands the voice however, as he believes he is to build a baseball diamond in his corn field. His wife is reluctant, but agrees, so Ray hews a section of his crop and builds the diamond, but to his surprise, nothing happens. Until a man in a baseball uniform appears one day, a man Ray knows to be “Shoeless” Joe Jackson, a deceased and shamed former major leaguer. But is what Ray sees a real life miracle or just the visions of a madman and in either instance, what will happen to this Field of Dreams?

I am not a fan of baseball and I am not a fan of sappy melodrama in cinema, so I should hate Field of Dreams to no end. After all, this movie is all about melodrama, mostly the bond between father and son, with an emphasis on the magic of baseball. So I am not even close to the target demographic, but when all is said and done, I loved Field of Dreams. There might be a lot of baseball to be seen, it is what drives the plot after all, but the basic theme is more universal. This would be a sentimental heartstring tugger in most instances, but the filmmakers are able to do so much more. The emotional coin is in place, but it isn’t as manipulative as it could have been, so the emotion present is more natural. You don’t connect to the material because you should, you connect to it because you want to, or perhaps can’t resist. As loathed as Kevin Costner is in most circles, even his critics should give him praise here, as his performance is natural and effective. All of the tumblers fall into place for this movie, the cast, the filmmakers, and the story all line up just right. I cannot recommend Field of Dreams enough, the movie is superb and deserves to be seen, time and again.

This film has been a staple of Universal’s catalog since the early days of DVD. It’s seen an HD-DVD release and a Blu-ray one as well, but with this 30th anniversary edition we finally go to the big leagues – 4K. Obviously, a new transfer has been created for this release and it shows, on every ear of corn and every pinstripe on the uniforms. Detail has been improved as has the color range, which greatly benefits from HDR giving us better shadow detail along with a warmer palette. Flesh tones appear warm and natural and I’d forgotten what Costner looked like with a full head of hair! All in all, it’s a welcome improvement and no, it’s not heaven – it’s 4K.

A surprise awaits with the inclusion of a new DTS X track. I’d never thought this was a film that “needed” a mix like this, but a few scenes have additional presence, such as the live baseball segments, but that is about it. Even so, this soundtrack is rock solid and covers all the bases. The surrounds get a decent amount of use, but this material simply doesn’t need that much juice. The music sounds great and dialogue is clean, so not much else we could ask for.

This new 4K edition offers no new supplements, but does include the previously-released 20th anniversary Blu-ray.

In the pantheon of baseball movies, Field of Dreams has to be up there with the best of them (though, for me, it’ll always be Major League). This cemented Costner’s status as an A-lister of the late 80’s and beyond. This new 4K version keeps all of the supplements from the Blu-ray while giving us a robust DTS X track and improved visuals. It should be on every movie/baseball-lover’s shelf.