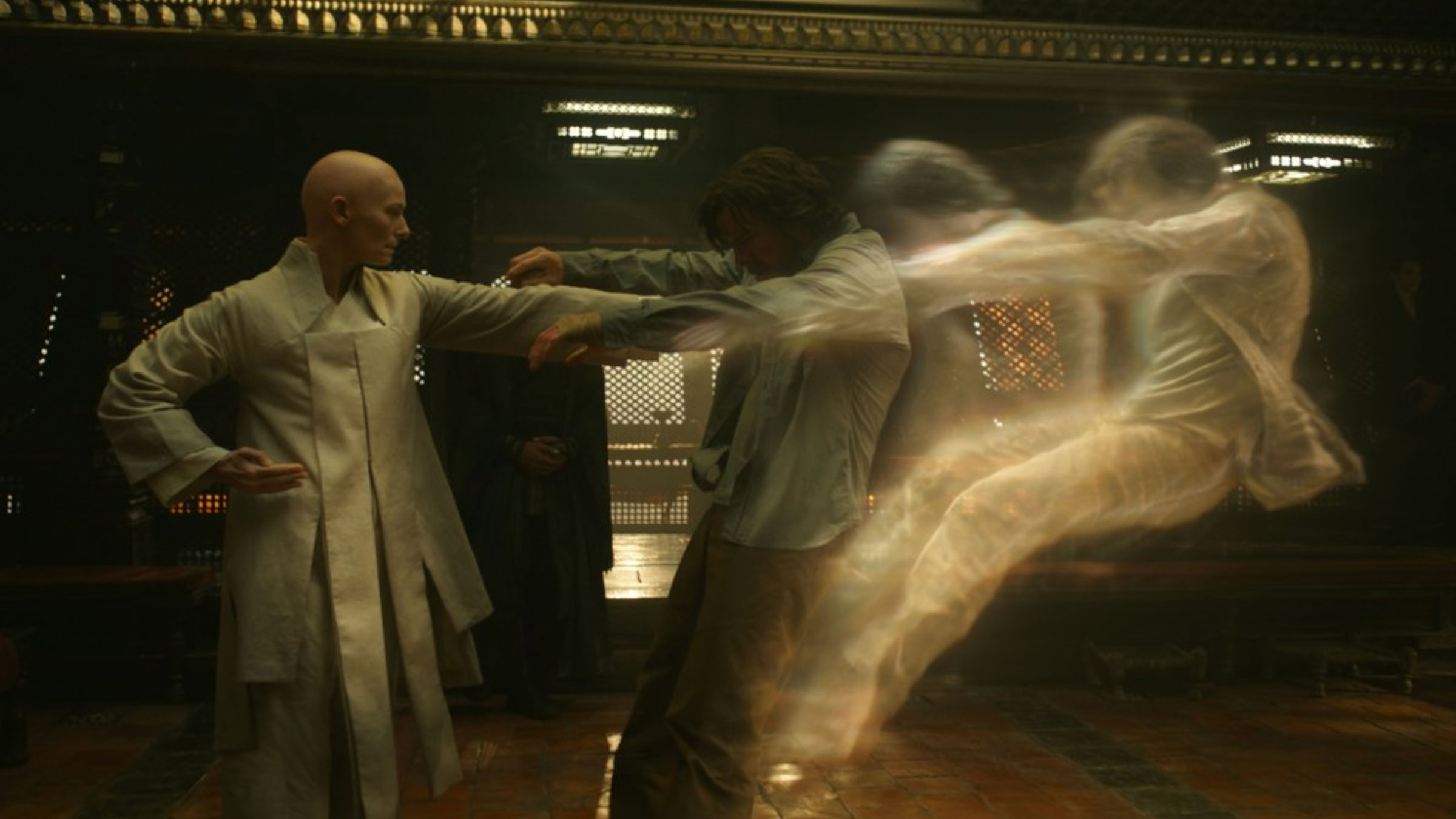 It’s weird to think that the entire Marvel Cinematic Universe (henceforth referred to as the MCU) started nearly a decade ago with Robert Downey Jr. playing Tony Stark in Iron Man. I’d ask a question like “who knew…”, but I’m willing to bet that there were some folks who did know what they were embarking upon and, nearly a decade later, we’ve got a slew of MCU films. The earlier installments were ones we’d all seen and heard of before. We all knew names like The Incredible Hulk, Iron Man and Captain America. But as we delve further and further into the Marvel Universe, the heroes are getting a bit more diverse. Not too many know of Dr. Stephen Strange, but this film does a great job of introducing him and making him what will be a big player in future films. Only two MCU films were released in 2016, Captain America: Civil War and this, so fasten your seatbelts because we’re taking a trip…to another dimension!

Dr. Stephen Strange (Benedict Cumberbatch) is a neurosurgeon and a very good one. He’s got the arrogance and skills to back it up as well. Think Dr. Gregory House, but without the beard (or cane). Things are going fine for Dr. Strange until an automobile accident badly damages his hands. As a surgeon, his hands are all he has. Strange exhausts his financial resources trying to find a way to regain their use, but to no avail. He eventually travels to Kathmandu for a more “holistic” approach to this problem and it’s there that he meets the Ancient One (Tilda Swinton) and her assistant Mordo (Chiwetel Ejiofor). They teach him the ways of the dark arts, but also about the astral planes and the “multiverse”. Strange, initially thwarting this approach, soon embraces it and finds he’s a natural. All is well and good until a sorcerer, Kaecilius (Mads Mikkelsen), attempts to summon the granddaddy of them all, Dormammu, from the dark dimension to destroy mankind. What’s a neurosurgeon to do?

Admittedly this is the the typical Marvel movie where buildings (and cities) are destroyed and we get an all out war that may or may not end mankind. Well, ok, we do…but not in the traditional Marvel sense. It’s important to note that Doctor Strange is an essential part of the upcoming phase of MCU films and we haven’t seen the last of our floating surgeon. No, he’ll pop up again in Thor: Ragnarok and when you consider that Thor too is from another plane of existence, these two might just hit it off. We’re in for a new crop of superheroes with Black Panther, The Inhumans and another Guardians of the Galaxy movie so if you’re a fan of the MCU then the next few years will be heaven for you. If not, well there’s the DC Cinematic Universe. Good luck with that.

If ever there was a film that was destined to be seen in 4K, it’s Doctor Strange. The physical and literal bending of time and space make for a very unique visual experience. If you take a few scenes from Christopher Nolan’s Inception (or maybe even Interstellar) and make couple it with an M.C. Escher drawing, you might get a feel for how some of these scenes look. Throw in a levitating cloak, someone who can open a portal to another dimension and you’ve got one very interesting-looking movie. All of the usual caveats are in place as well. Detail is tack sharp, flesh tones are warm and natural and contrast and black levels are solid. The addition of HDR and a slight uptick in detail only sweeten the deal. They don’t come any better than this, folks.

The film has been given a slight bump in audio quality with the addition of a Dolby Atmos soundtrack. There are those that really aren’t too fond of Disney/Marvel’s Atmos soundtracks, but I’m no audiophile. It sounds good to me and even has a bit more depth than the previously-released DTS HD track. Then again I guess if you’re bending reality, it can sound any way the director pleases, right? Seriously though, this is one dynamic mix that isn’t afraid to use each and every speaker in your setup. The front stage is frantic with action, but the surrounds get a workout and really add that sense of depth and dimension (sorry, couldn’t resist) to many scenes. The LFE thump in as well, offering some much needed bass to some of the third act’s antics. Vocals, of course, are pure and sharp. It’s a great-sounding mix that’s a definite compliment to the visuals.

The supplements are the same as the 2016 Blu-ray (also included in this set).

When it comes to characters (or money), the MCU doesn’t really need much help. We’re now in Phase 3 and we all know that all of these Marvel movies are going to intersect. Doctor Strange might be the most visually ambitious of the lot and we will see him in future films, both his own and Thor. If you’re a fan of the Marvel movies, and very few aren’t, this one is a no-brainer.