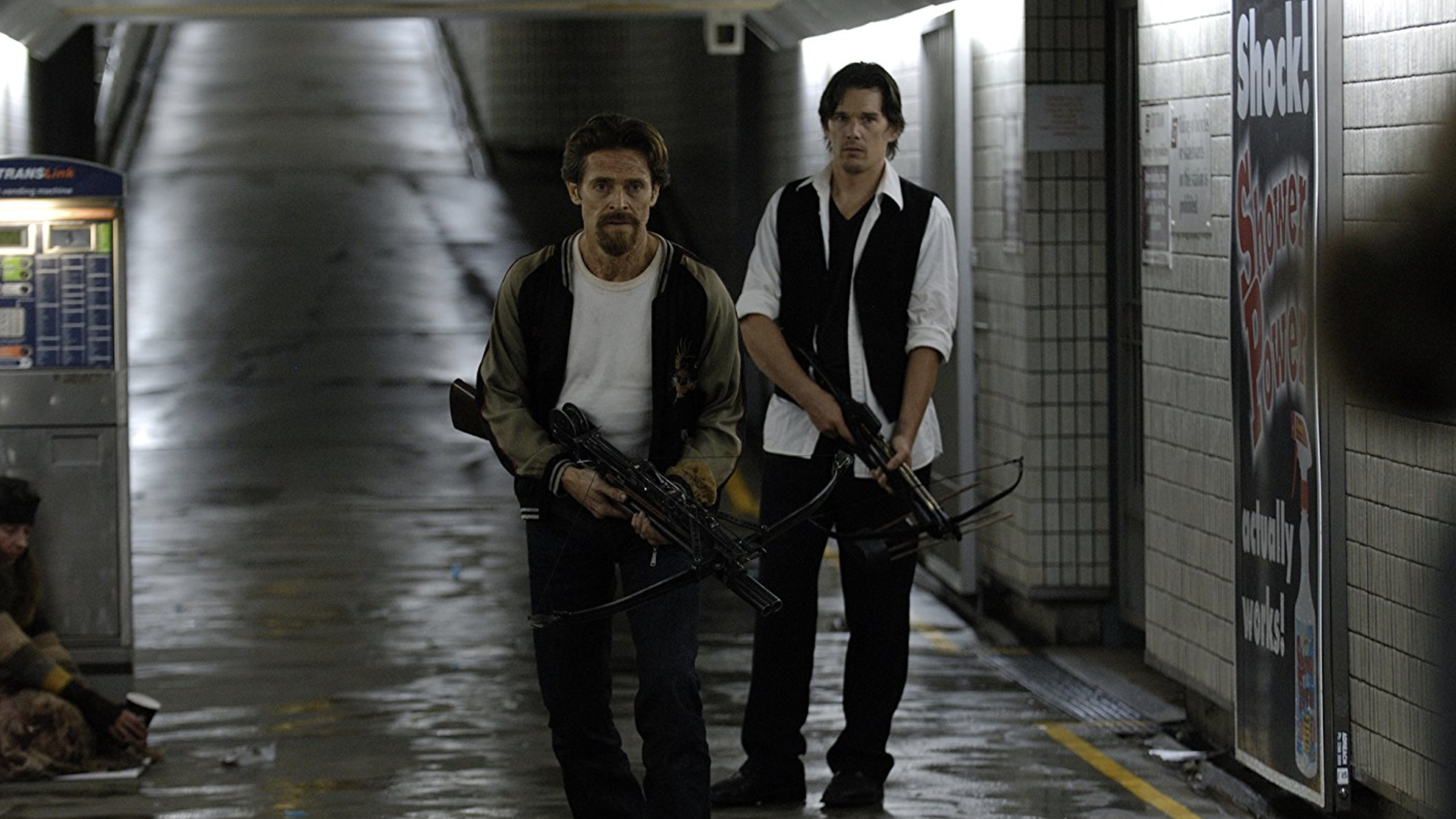 Let’s face it. When it comes to movies about vampires or zombies, most everything that comes out is “been there, done that.” And that’s fine. I don’t mind seeing another film in an already established genre if it’s well-written, acted and directed. The point is to entertain. So in 2010, when Daybreakers was originally released, it was a good time to be in the vampire business. Twilight was in its prime and on the small screen, True Blood was finding success (this is before the show derailed, of course). Add to that, the casting of two of my favorite actors: Ethan Hawke and Willem Dafoe, well this one seemed to have my name written all over it. Much like the Blade movies, this one seemed to cast the blood-suckers in a different light (pardon the pun).

Set in 2019, the world has become overrun with vampires. They’re the master race with humans only serving as livestock to keep our pale-skinned superiors alive. But there’s a shortage of blood and it’s now up to Dr. Edward Dalton (Ethan Hawke), a corporate hematologist in the employ of Bromley Marks. The company is working on a synthesized blood substitute, yet makes their profits on human farming. Dalton hasn’t fully embraced his “vampire lifestyle” and believes that humans and vampires can peacefully coexist. His brother, Frankie (Michael Dorman) disagrees. Dalton happens to stumble on a small resistance group of humans who, led by “Elvis” (Willem Dafoe) might have discovered the secret for vampires to turn back into humans. But is it good business?

There’s a lot to like about Daybreakers and I loved every minute of it. I enjoy a fresh take on what could have been a direct-to-video blunder of a film. Hawke and Dafoe are both amazing in their respective roles and let’s not forget the amazing Sam Neill in the role of the corporate monster. Directors Michael and Peter Spierig (akd “The Spierig Brothers”) would team up with Hawke again a few years later in Predestination and would direct Jigsaw a few years later. To date, they haven’t attained the acclaim that this movie brought them, but I’m always intrigued by one of their films. Fans of the vampire genre can do far worse.

Despite the somewhat noir look and feel of this film (which I love), there’s one color that stands out. And I bet you can guess what it is. Red. The colors are muted from the doors, elevator buttons, lipstick – they’re all red. And it fits with the theme of the film. Naturally most any film in the vampire genre will have a fair share of darkness, so the contrast and colors benefit from the HDR here. Lionsgate’s 2.39:1 4K HEVC transfer improves upon the Blu-ray offering more detail, depth and contrast. It’s another example of how a good-looking movie can look just a bit better when given more color and 4x the resolution. Who’d have thought?

Getting a bump from the original DTS HD Master Audio track is a new Dolby Atmos track that really doesn’t pull any punches. Granted, this isn’t a film that will have the neighbors complaining, but I found the mix effectively uses every speaker and does it well. We really get an “atmospheric” experience here and it just works. Vocals are a bit on the soft side, but I don’t fault the mix itself, only the way the film was shot. That and Hawke doesn’t exactly yell his lines in any film he’s in. It’s a great-sounding track that’s sure to satisfy.

The included Blu-ray has all of the supplements, but a few have been ported over to the 4K disc.

The vampire genre is, always has been and most likely always will be around as long as films are made. I personally consider this one of my favorites of said genre and, having always been a fan of Ethan Hawke and Willem Dafoe, can’t get enough. The upgrade in picture and audio quality only enhance (pardon the obvious pun) this release – it’s a winner. 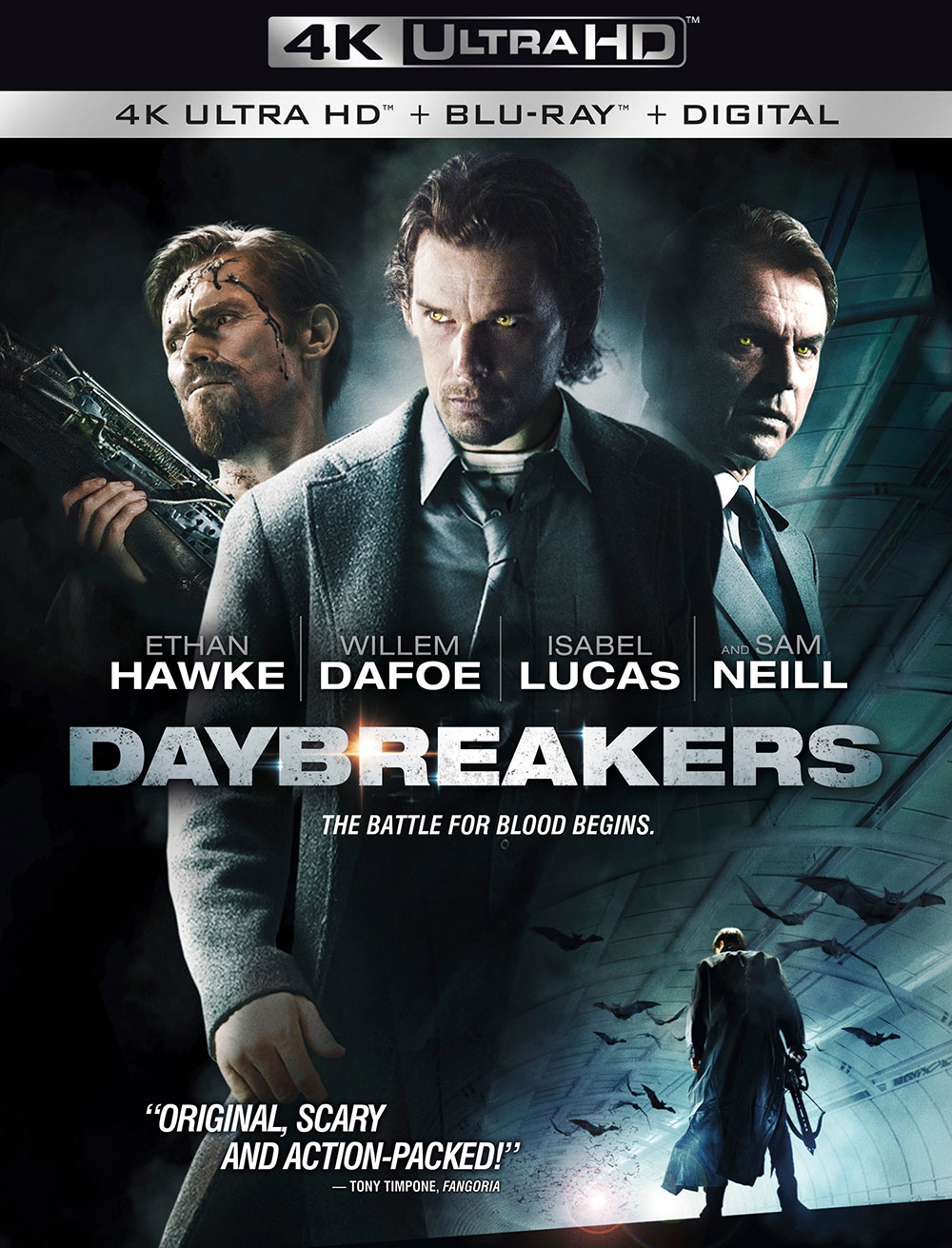