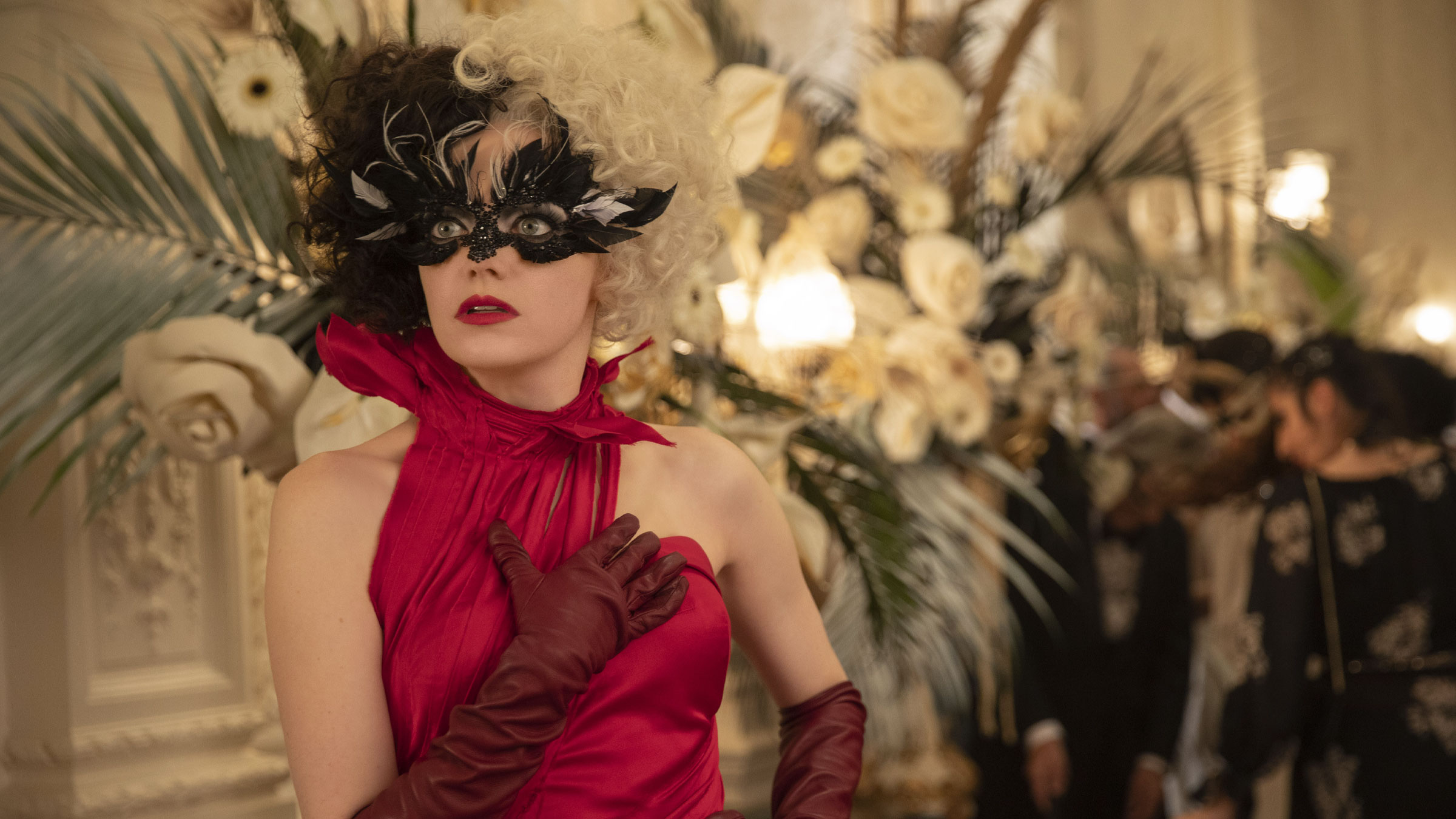 There’s a winning formula out there and Disney has it. I suppose one way to ensure success is to buy every movie studio in sight and rely on your 70 year old catalog of films and classic animated tales. And, wouldn’t you know, Disney has that in spades. For those that dislike and/or disapprove of the live action remakes (or origin stories, like this) well I got news for ya…it ain’t going to stop anytime soon. See, movie studios like to make money. And that’s what these movies do. So as long as the bottom line is out of the red, we’ll be seeing them for quite some time. Much like Maleficent, which gave a new perspective on the Disney villain, we now have Cruella – focusing on the nemesis from 101 Dalmatians. Will the film put her in a new light or should it have been left alone?

We meet Estella (later to be named Cruella de Vil) as a young girl. She’s encouraged by her mother to calm down, choose a color for her hair and be a nice little girl. But when her mother is tragically killed, she ends up on the streets and learns how to become a pickpocket. The boys she’s now in cahoots with, Jasper (Joel Fry) and Horace (Paul Walter Hauser) are her new family. We then flash forward to her several years later. She dreams of becoming a fashion designer and an opportunity arises working for the Baroness (Emma Thompson). Estella impresses the Baroness with her designs and moves up in the company. But when it’s discovered that there’s a connection between the Baroness and Estella’s mother, her wild side once again emerges. She dons the moniker Cruella de Vil and she does everything in her power to ruin the Baroness. Oh, and the Baroness owns dalmatians. That’s kind of important.

There’s a bit more to the story, but I think it’s safe to say that anyone reading this has the gist of what happens in the future. But what Cruella does, and what I believe what was intended, is that it does give the character (bad as she is) a more “human” side. It shows us why she ended up the way she is and why she does what she does. Truthfully I got a lot more out of this than watching those little spotted dogs run around with their antics. Then again I don’t like dalmatians. They’re not the best breed of dog. But yeah, they’re cute, so…Both Emma Stone and Emma Thompson give some great performances and it’s clear they had fun with their roles. Let’s face it, who doesn’t like to be the antagonist every once in a while? Cruella won’t change the world, but it gives a new perspective on what was an old and tired Disney villain.

I’ve become so used to films presented in a wider scope (i.e. 2.39:1) that when a new movie comes out and actually fills the 16:9 screen, it’s somewhat of a delight. As one might expect, Disney’s 4K presentation of Cruella is nothing short of perfection. Detail is elaborate and showcases some of the many costumes showcased throughout. Flesh tones are smooth, texture rich and it’s as if we’re standing right in front of the actors. The entire film has a very cinematic look and feel to it that showcases a film like sheen throughout. The HDR give the movie a little extra “oomph” with the black levels as well as the highlights. It’s a very engaging and lively film.

Included is a Dolby Atmos track that makes use of every speaker in your system. Vocals are at the heart of this one (not dalmatians, as some might wrongfully expect) with pure, rich tones that satisfy. The surrounds are used surprisingly often that fill the room with a atmospheric range I’d not thought possible for a film like this. Nicholas Britell’s playful score adds a bit more to the scorecard. Granted, this isn’t the end all/be all of surround sound tracks. It’s got limits. But I was amply satisfied by what was offered. You will be too.

Much like Maleficent took a classic Disney villain and gave her an origin film, so to do they do this with Cruella. And it makes them a bit more human as well. I’m surprised to hear myself say this, but I actually enjoyed this. I’ve never found Emma Stone too appealing, but I have to admit that in some of her outfits…well, maybe I’m attracted to bad girls! Disney’s 4K presentation is, of course, spectacular and there are enough supplements to warrant a purchase. At 134 minutes, I don’t know if the target audience will lose interest or not, but it’s entertaining nonetheless.