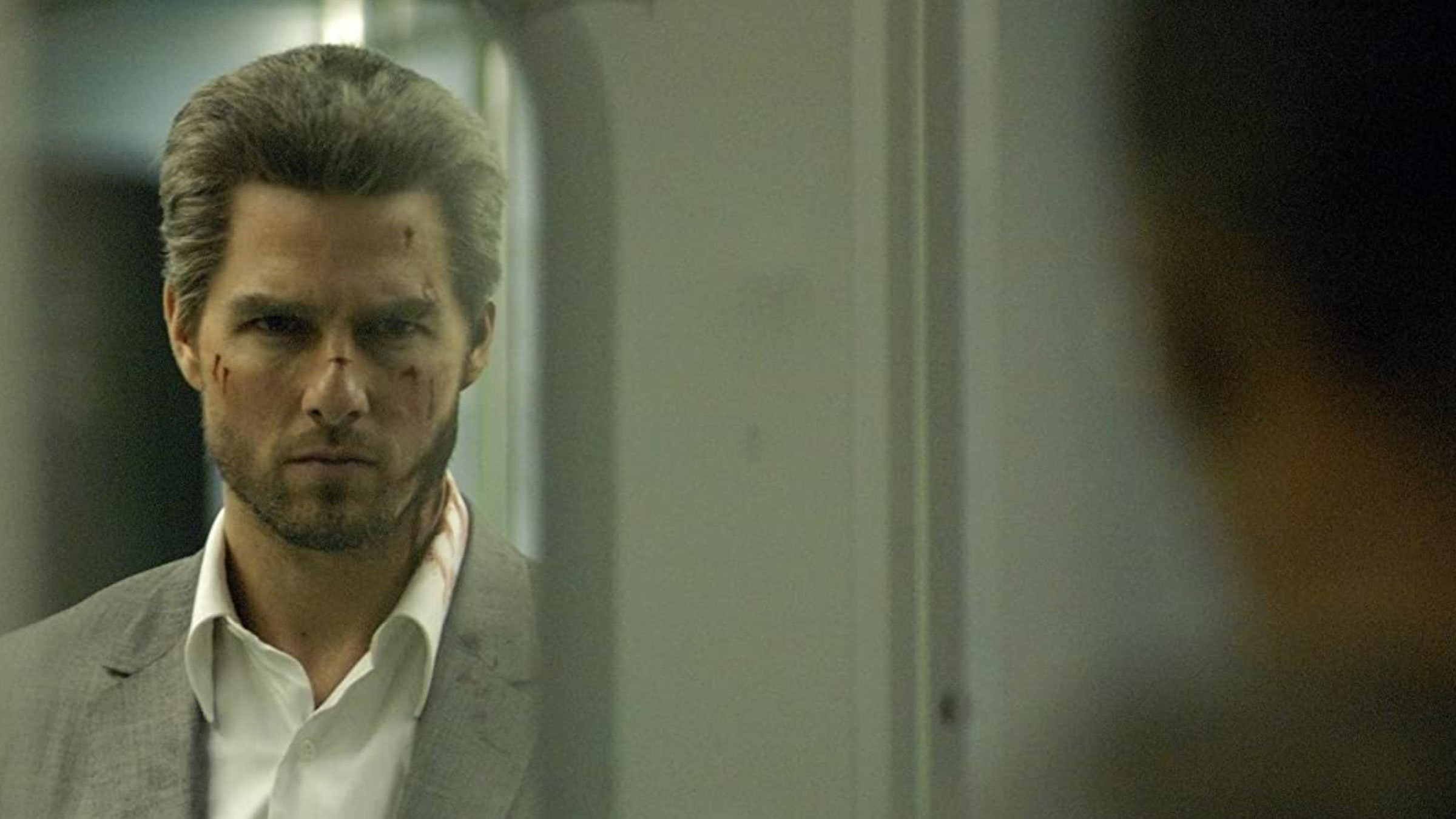 It seems like during every summer film season, August produces at least one surprise that blows this viewer away and remains so for the next couple of years. Films like The Fugitive, The Sixth Sense and in a less successful financial but better movie because of it way SimOne, have been great examples of the closing month of the summer season and this year stands as no exception. All of those films have a certain actor or actors doing roles that expand on their persona or bring light to a new one that makes them all the more better for it. In the great hands of director Michael Mann, a tale of 2 characters suspended through yellow into the red and blue of the night in Los Angeles going from one location to another. This is a high charged tale, this is the L.A. nocturnal mileage thriller Collateral.

Max (Jamie Foxx) has dreams of a future and it’s sitting right into the neat and clean environment of his yellow taxicab. Striking up a conversation with a female customer that catches his eye (Jada Pinkett-Smith), Max shares this dream he has about getting away from it all to a better place that goes beyond his exotic little picture under his visor. As he drops her off, he gets her card and an opening of confidence. This opening is closed when a sharp dressed customer at the drop off is invited after a minor brush off from Max. During their drive, this customer proposes to make some real estate stops and offer a nice sum of cash for Max’s services. The customer introduces himself as Vincent (Tom Cruise). Little does Max realizes that his stops are not ordinary sign and closures but hits made for an even bigger purpose pulling Max in for a night the both of them will not forget or be left the same at its end.

Los Angeles has never looked brighter, more eye popping or visual than in this film. Whenever a city is portrayed in his films, you can’t help but admire the bright colorful lights that come with that. This is help from shooting the majority of the film in high definition giving a look that motion picture film can’t come close to replicating.

From the arrival at the airport to the climax of the film, Mann keeps a great pace going and a tension that never lets up from one minute to the next. He gets the best out of his actors by keeping them at edge along with exposing a few weaknesses every now and then and taking advantage of that exposure. Mann is a director that is never about cliche. He’s about actions and the character explorations around him that give the film another level of credibility. The film is never boring and one of the reasons why are the solid performances of Tom Cruise and Jamie Foxx.

As Vincent, Cruise brings a dressed to kill feel to this scruffy assassin being so good and being so bad. He has a job and must do it before night’s end. He, like Max, has demons to fight within this short time period and they both come across a few roadblocks along the way that doesn’t involve driving. He’s the passenger that turns up the panic button and pull back lever in Max and Cruise does a masterful job at it. Tom also favors the rare non-main title credit routine as this follows in the same way Vanilla Sky did.

As Max, Foxx shows just how multi talented he is showing a man with a dream that may never come true and a constant shooting down of confidence. But within that shooting down, Max finds a way to come back up in moments of heightened tension and chaos that may not be familiar to him but like the best wild cards in that kind of crisis situation it pays off in a most unexpected way.

Collateral keeps the tradition of Michael Mann films in Panavision as the film is given the anamorphic treatment in the result of a 2.40:1 aspect ratio. It’s been a while since I sat down and watched this film, but the new 4K remaster breathes some new life into this movie. The look of the majorly digital film is amazing. The colors pop out in the night sky more vividly than expected. There is a few instances of haze throughout but the instances are minor and few and far between. The picture is flawless with the lack of film grain and scratches. There isn’t a glitch to be seen or to be noticed. Many presume digital is the wave of the future for filmmaking and this is a great example of how it can be used properly.

The previously-released Blu-ray had a DTS HD Master Audio track that was an upgrade from the Dolby Digital track found on the DVD. What we get here is that same DTS track, but that’s OK. The gunshots sound in a dynamic that only I had noticed both times I viewed this film on the big screen (it’s been a while, of course). The balance of score, dialogue and effects work nicely throughout and all can be heard through all the channels from the dialogue in the center to the effects and score throughout the outside channels. I admired the use of Bach’s Air in one scene that sounded quite pretty on the stereo speakers. If only there was an isolated track to appreciate that, it would be all the more better for it but in this case it’s fine indeed during this film and the track is loud, the surround is well executed and the result is music to your ears and your head as well.

Sadly, there’s nothing new here with regard to the supplements. The 4K disc has the commentary and a trailer while the included Blu-ray is the same as the previously-released version, supplements intact.

Collateral marks the first, and perhaps only, time that Tom Cruise has played the antagonist. And he’s great in his role. Michael Mann once again celebrates Los Angeles like few others can. Paramount’s disc has upgraded video, but everything else from the previously-released Blu-ray has remained the same. Nevertheless, this is a film that needs to be seen (if not already).