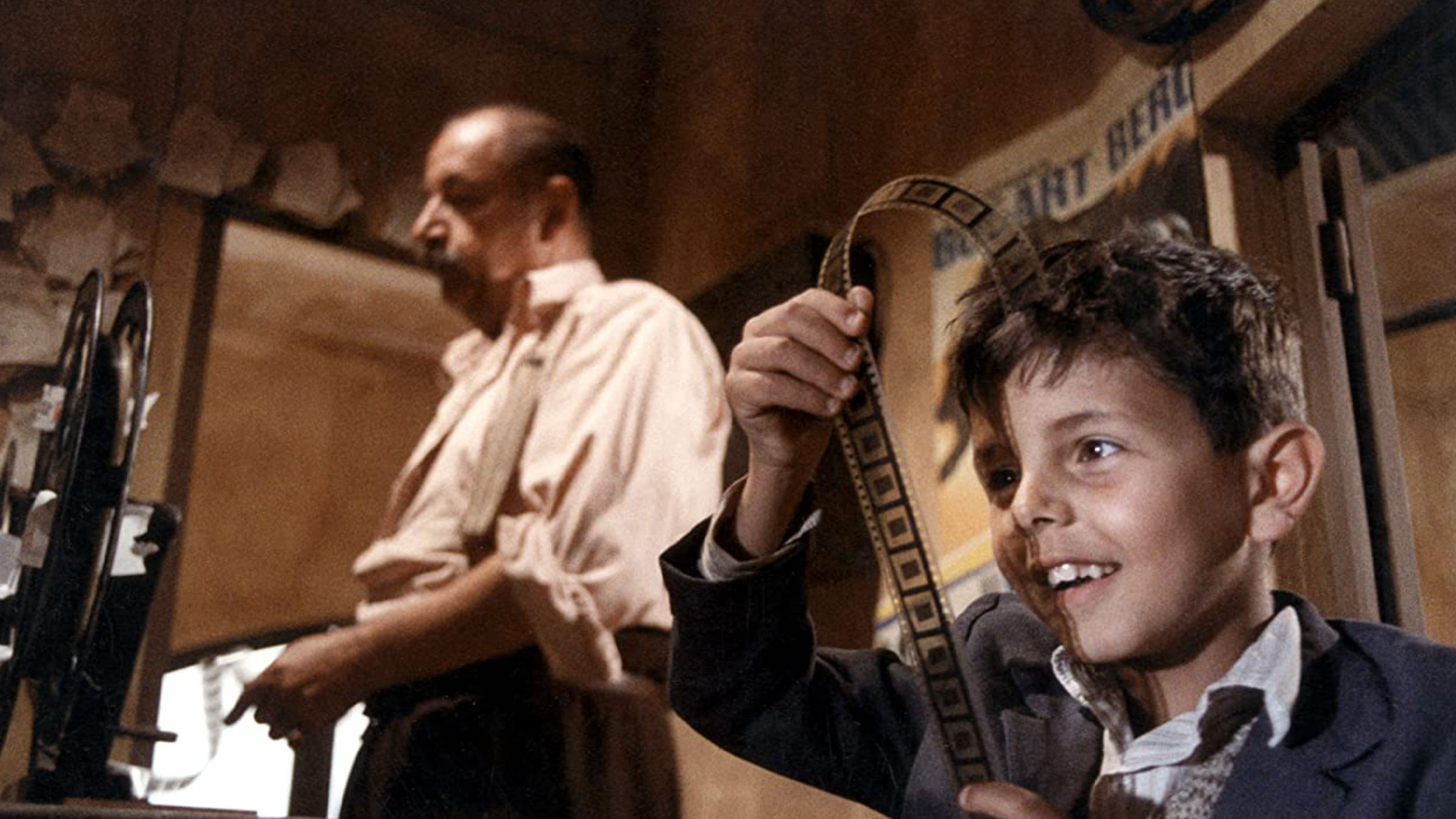 Arrow Video is one of the most interesting film distributors. I have recently extolled the virtues of Arrow Video’s releases, which are eclectic and tend to be cult films. Luckily, the label has drawn enough attention in the United States (they are British-based originally,) that they are beginning to bring over their Arrow Films line. For film lovers, this is good news. For their first big title that they brought to the States they chose a fan favorite, Cinema Paradiso. This film was seen in every movie store in the country in the nineties facing forward in the foreign-film section of VHS tapes. It won the 1989 Academy Award for Best Foreign Film, and is one of the most endearing films imaginable.

The plot of the film revolves around Salvatore, a gray-haired Italian filmmaker. Salvatore’s mother has left a message for him that his friend Alfredo has passed away. Salvatore had not been home in thirty years. Upon hearing the news, Salvatore begins to remember his life in Bagheria, Sicily. As a boy his nickname was Toto and he was tiny and obsessed with the films that would play at the Cinema Paradiso, a small cinema in the center of the town. His father had not returned from fighting on the Russian front, so his mother was left to her devices to raise him and his younger sister. As Toto grows up sneaking in to watch films at the cinema while the priest has the projectionist remove anything as objectionable as two people kissing, Toto befriends the projectionist Alfredo. Alfredo is a sweet-hearted and lonely man whose lack of education has forced him into a job that leaves him isolated. When the mother objects to Toto coming to the theatre, Alfredo offers the boy a job as his apprentice. An accident occurs that causes Toto to become heroic and disables Alfredo. Alfredo in his teenage years continues to work as a projectionist and befriend Alfredo. He also begins to fall in love with a beautiful and well-to-do blonde named Elena. This romance is the focus of the latter half of the film.

Cinema Paradiso is a truly heartwarming and bittersweet film. It captures a lot of the intensity and innocence of youth and is much better than many coming-of-age films at describing that intense feeling of love that one feels in their teenage years. The film reminds me a little bit of a James Brooks film simply because it has such affection for its characters. Audiences and critics alike all fall in love with the movie, with good reason. It is sweet and nostalgic in a way that few films can pull off. I liked it when I saw it years ago and it has aged well.

One of the best aspects of the film is the fantastic score by Ennio Morricone. Morricone is probably my favorite film composer of all time, and this is one of his more enigmatic and powerful scores. The score is so grand and sweeping it drives home the emotional punch of the finale. The acting is also solid throughout with great child actors (Toto is fantastic, seriously) and the equally fantastic Philippe Noiret.

It should be noted that while this disc, like its predecessor, contains two cuts of the film (the 124 minute theatrical version and the extended 174 Director’s Cut) only the 124 theatrical cut has gotten the 4K treatment. The longer Director’s Cut is the same 1080p transfer that we’ve seen before.

That said, looking at the new 4K image, all the usual benefits and caveats apply. There’s a bit more detail and depth. The HDR probably has some of the biggest gains in that the shadows seem to be a more pleasing shade of black (if that’s even a thing). While not a night and day difference when compared to its predecessor, there’s been an uptick in quality. And it shows.

Arrow Films obviously put a lot of care into this MPEG 4 AVC codec of a new 2K restoration from the original film elements. The transfer must have been in great shape because the film looks fantastic. Clarity is very good with some crush creeping in during some night-time scenes. Detail is very-pleasing and natural, especially on the day-time scenes. There is grain evident, but it all seemed to be in place to not lose detail. This is a very solid job by Arrow Films and I look forward to seeing what they do with other classic films!

Two tracks are available to choose from, an LPCM 2.0 track and 5.1 DTS-HD Master Audio track. I did not detect a huge difference between the two tracks, but they both sounded very good to me. There is not much directionality, but the film still holds its own as far as depth of sound. Arrow has done their due-diligence and made sure that the audio is very clear and I did not detect any noticeable hiss. Clarity on the track is superb. The best part of this track is the beautiful score by the master Ennio Morricone. Fans are going to be pleased!

All of the same supplements from Arrow’s previous disc are present here as well. Nothing new has been added.

Cinema Paradiso is a heart-warming film that deserves to be seen. Arrow has upped the ante with this new 4K version, but truthfully if you’re a fan of the Director’s Cut and already have the previous Arrow disc – keep that. Arrow Films have done an excellent job on the transfer of the elements, and the supplemental features are vast, including two cuts of the film.