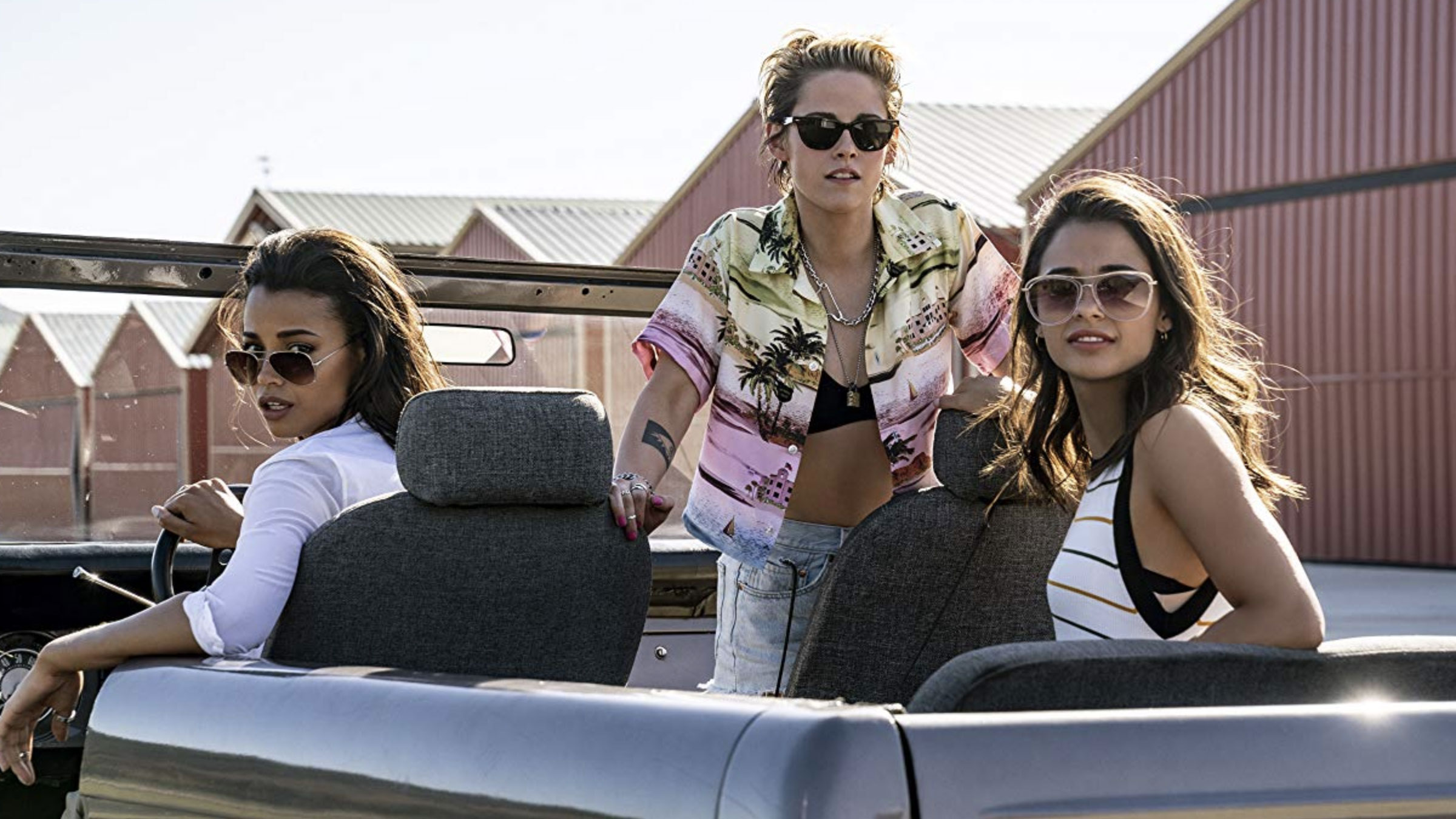 I was a little too young to remember the original Charlie’s Angels television show. All I knew is that it had Farrah Fawcett and the ladies were sexy. The series ran for a few years and then was relatively forgotten. Enter the year 2002 and we were treated to a feature-length film. The names were familiar with Drew Barrymore leading the way along with Lucy Liu and Cameron Diaz. The film and it’s sequel a few years later, were fun but there were only two of them and we’d figured they’d run their course. But, didn’t you know, Hollywood loves to take “old ideas” and make them into new movies. That concept is call, say it with me folks, a “r-e-b-o-o-t.” Yes, we’ve got a new generation of Angels led by Debbie Downer herself, Kristen Stewart. Oh and the film is directed by a woman who seems to want to make a “girl power” statement. Ready Angels?

The film, as we already know, is a reboot, but it’s still set in the same universe as the previous films. We meet Elena (Naomi Scott) who works as a software engineer for a company called Brok. She’s helped design a device called Calisto, though it’s flawed in a pretty significant way. The company suits don’t seem to mind this, though and when Elena becomes a whistleblower, she’s now put in harm’s way. This segues to the Townsend Agency, run by Charlie (Robert Clotworthy) to swoop in and save the day. We then meet three Bosleys, Edgar (Djimon Hounsou) who builds a team with two angels: Jane (Ella Balinska) and Sabina (Kristen Stewart), the “wild and carefree” type. They enlist the help of a former angel Bosley (Elizabeth Banks) and if you think there are too many Bosley’s, it’s the rank for a mission operator. Confused yet? Thought so.

There are a few entertaining moments in the movie, but all in all this seems to be about female empowerment. Remember the scene in the previous film where the three ladies did a striptease? Yeah, that won’t happen here. It’d be too unpolitically correct. This film feels more like it’s about style and the costume design than actually weaving together a cohesive plot. Banks has talent, no doubt, as an actress and director (the cover of the movie touts this as “The Director from Pitch Perfect 2!” it was either that or Movie 43). Still, I suppose the name “Charlie’s Angels” still carries some weight, namely from the television series. This one isn’t as bad as I made it out to be, but maybe go watch the 2002 version instead?

Debuting on 4K with a super sharp transfer that’s sure to please fans and casual viewers alike. It’s been some time since I last viewed the regular Blu-Ray, but this marks a definite improvement. Overall sharpness and definition is improved. The ratio here is 2.40:1 and the HDR is one of the better recent 4K titles I’ve seen. The pores and scars on some of the faces seen here offer increased clarity as well as smooth and even colors and strong background details.

The DTS X track is booming and keeps us engaged from start to finish. Vocals are clear and the action really invades us and brings us right into this world. I felt fine with the track on the Blu-ray disc, but this one offered a strong improvement as well, which had a bit more clarity to it. Like the new transfer, this serves the film in a strong manner.

It’s been nearly two decades, so I suppose it was time for another reboot of this series. I didn’t particularly enjoy the film, but it did have a few moments. Plus I’ll see anything with Patrick Stewart in it. Sony’s disc excels on the technical level, but apart from that I’d say this one is best served as a rental.