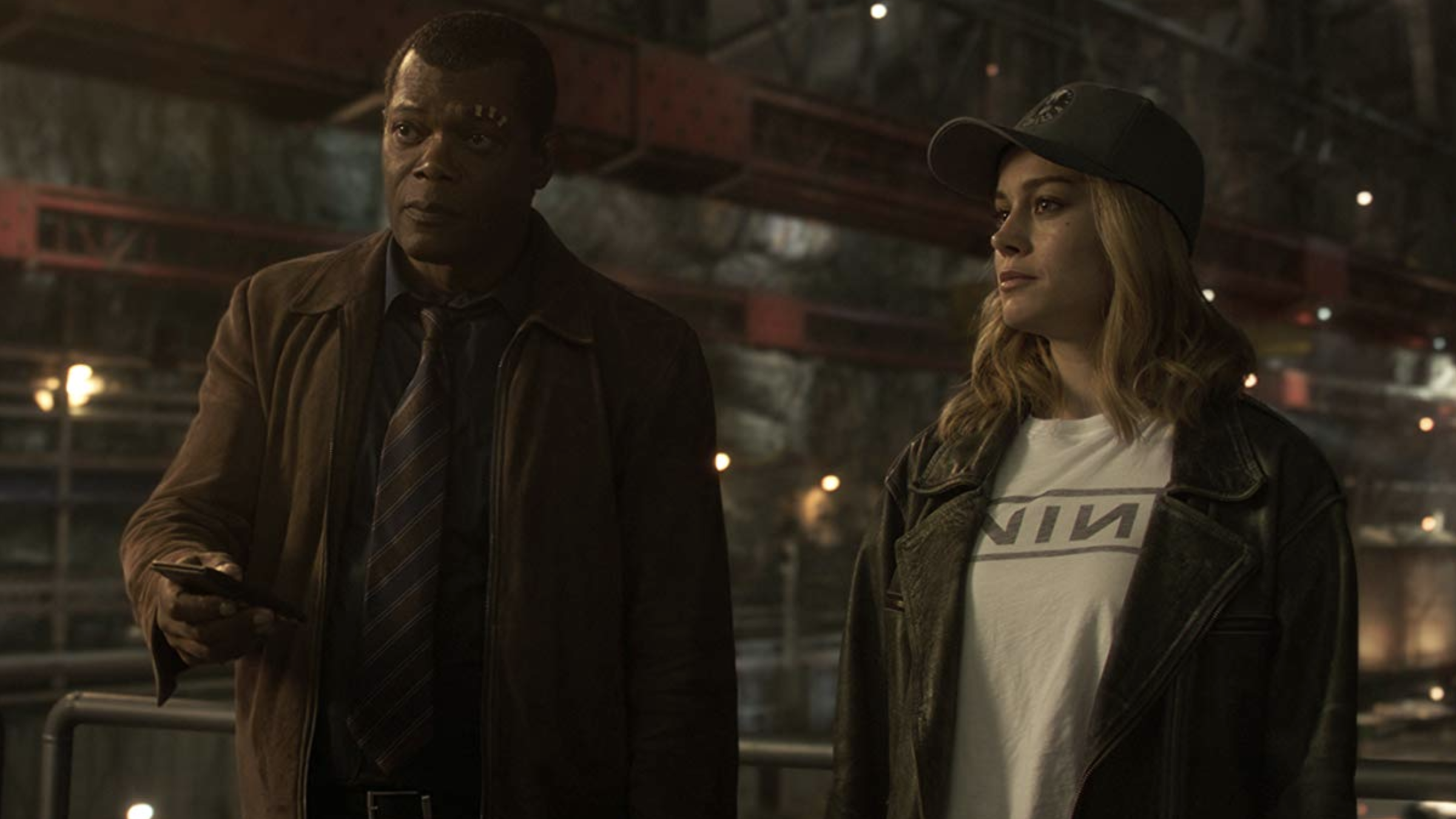 I have to tip my hat to the Marvel Cinematic Universe. It all started with Iron Man back in 2008 and this juggernaut is something that seemingly will never end. And I’m sure Disney loves it because every new film seems to gross over a billion dollars worldwide. I’ll go on the assumption that anyone reading this review is familiar with the MCU. If not, there’s really no reason you should be reading this unless you’re a huge fan of Brie Larson. If that’s the case, go check out 21 Jump Street or Room. If you’re a fan of Samuel L. Jackson, go check out any other movie instead as he’ll most likely be in it. Or if you want to see another film with both of them in it, maybe Kong: Skull Island? Kidding aside, the MCU is changing and I’m willing to be that the heroes we’ve been so accustomed to (Captain America, Iron Man, Thor, etc.) might not be a part of it (the MCU) in the future. But thankfully Marvel has hundreds, if not thousands, of heroes to bring to the screen. Carol Danvers, aka “Captain Marvel” got the call and she plays a fairly important part in things to come. This is her story.

There’s a bit of a backstory (for those who don’t know the ins and outs of this particular hero) between two intergalactic races: the Kree (noble warrior heroes) and the Skrulls (shape-shifters). Both of them make their way to Earth where the Skrulls are attempting to track down a light-speed engine developed by Wendy Lawson (Annette Bening). This technology will help to conquer other planets. Vers (Brie Larson) is a member of the Kree and discovers that she’s been to Earth before as an Air Force pilot named Carol Danvers. Her memories are, however, vague at best. She meets and teams up with Nick Fury (Samuel L. Jackson) in an effort to find the engine and ensure it doesn’t fall into the wrong hands.

I did leave out a few details. Not because I’m lazy, but because I figured that by looking at the movie poster/cover of the Blu-ray, you’ll know that Danvers (aka “Captain Marvel”) has super powers. The film explores those as well, but that’s part of the fun.

I’d mentioned above that the movie introduces us to a new member of the Marvel Cinematic Universe. Astute viewers will know that at the end of Avengers: Infinity War, we saw the logo on Fury’s pager (yes, pager). This explains that and more. There’s a different vibe in this film and it’s not unintentional. The movie takes place in the mid 90’s on Earth. The Blockbuster Video store is a dead giveaway. As is the grunge look that Larson’s character sports throughout. The more I think about this movie, the more I tend to compare it to Rogue One: A Star Wars Story. Why? It seems to exist in a vacuum and only then for a few reasons: to introduce us to a new character in the MCU and to fill in a few plot holes that exist in the current universe. “Oh, so that’s why it was called the Avenger Initiative!” That’s not to say it’s a bad movie. It’s not. And I realize that there are plans for Captain Marvel in future films. Still, this movie has a rightful place in the Phase III lineup and it’s certainly worth seeing (if for no other reason than to see Nick Fury with two eyes and a full head of hair).

I’ve been reviewing movies on just about every disc-format known (except LaserDisc) for over two decades. On occasion I just sit there and look at my screen and think “is there something I can say that I haven’t said before?” Odds are the answer to that is “No.” There are only so many adjectives one can use to describe how good, bad or mediocre a film can look on any given setup. All that said, Captain Marvel represents the latest entry in the MCU and as I think anyone reading this will attest, it looks pretty darn good. The 4K offers a bit more color rendition than the Blu-ray counterpart, but either way you go you’ll be fine. Larson’s character has an “aura” about her for the last act of the movie, the CGI throughout looks splendid. Detail is razor sharp and contrast and black levels are rock solid. Suffice it to say that no matter how many times I try and say this, I really do mean it – this is a fine-looking picture.

The audiophiles out there are licking their chops for this one, I’m sure. It’s been said (factually, I might add) that some of the Disney/Marvel titles have had some lackluster Dolby Atmos soundtracks with them being quieter or levels not up to par, etc. I don’t know about you, but when I watch a movie, I sit in the middle of my living room and just enjoy the ambiance. I found no such troubles with Captain Marvel, rather I somewhat dug the 90’s soundtrack and found vocals sharp and crisp. The latter part of the film delivers more action as the hero truly emerges. This engages the surround sound, both up and down (depending on where your speakers are) and makes for a great listening experience. I see no reason that this track won’t wholeheartedly satisfy its viewer.

Captain Marvel, as is the case with most all Marvel movies, did well at the box office. It made a billion dollars worldwide. So we’ll be seeing Carol Danvers again (and most likely again). While it is nice to see some “new blood” in the MCU, I feel that this movie was more of a segue between the Phase III films and Phase IV (even though Spider-Man: Far From Home is technically the last Phase III film). Then again, maybe that was the point. Larson does fine in her role and it was nice to see a “90’s era” Samuel L. Jackson again. I missed that version of him. The disc looks and sounds great and will make a worthy addition to the ever-growing MCU. 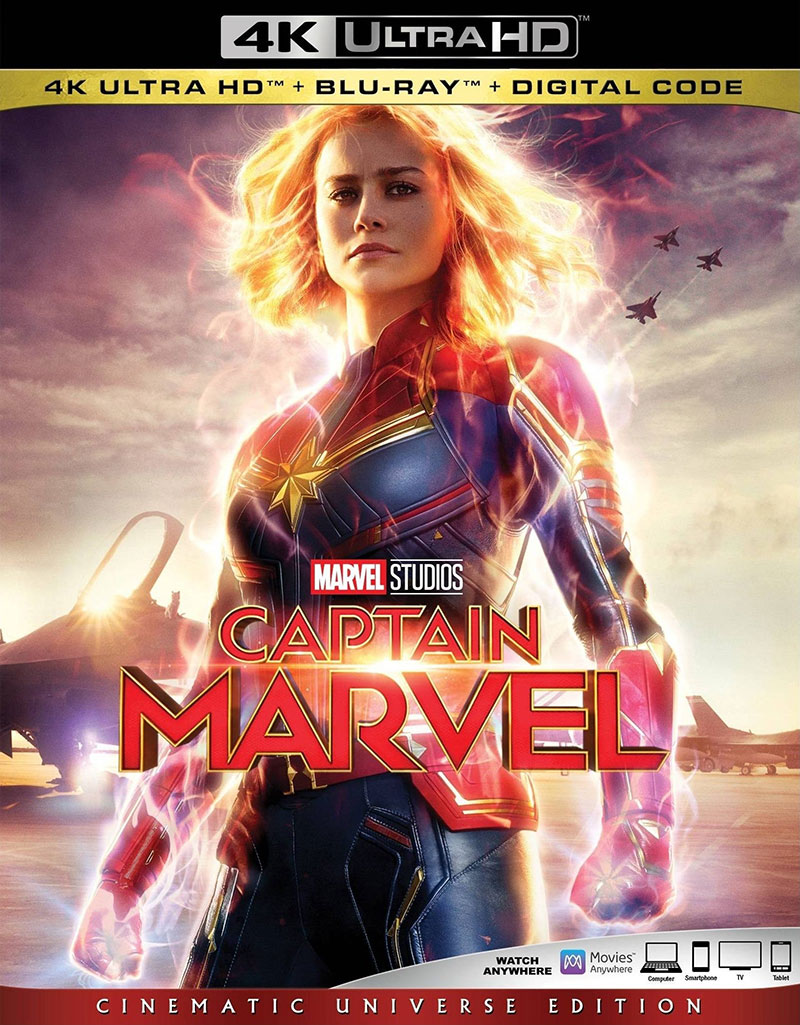