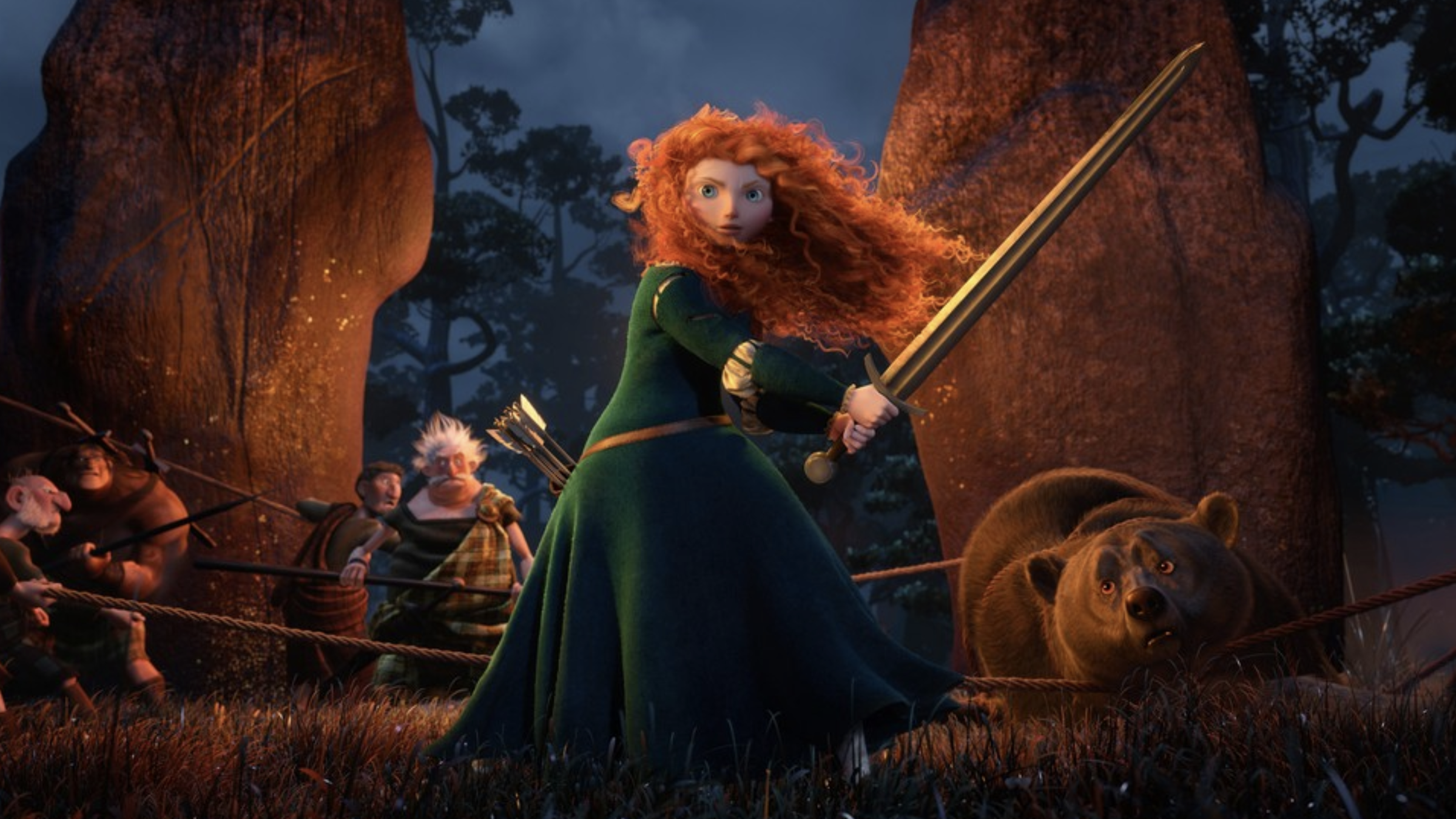 I’m not alone when I say that I’ve seen every Pixar movie that’s been made.  Whoops, I’ve never seen Finding Nemo (yes, really) but it comes out on Blu-ray in a few weeks and I’ll give it my first viewing.  However, seeing as it’s regarded as one of the best (if not the best) Pixar movie out there, I don’t think I’ll be disappointed.  But the word “disappointed” is one that you’ll see more than a few times in this review.  More on that later.  As most anyone knows, Pixar animation has literally changed the face of films moving them from a classical 2D format to a computer-generated world of 3D.  Starting out with Toy Story back in 1995 and culminating with their latest effort – Brave. There’s been a bit of a shakeup in the Pixar world as it’s now its own studio and not really “owned” by Disney any longer.  I could have my facts a bit distorted, but I don’t think so.  Last year’s Cars 2 wasn’t as well-received as some of the other titles and with this newest member of the Pixar family, they were hoping to once again knock it out of the park.  The question is…did they?

Undoubtedly we got a glimpse of Brave before it came out.  A pricey TV spot during the Super Bowl alerted parents worldwide that the newest Pixar movie was coming out this Summer.  We meet Merida (voiced by Kelly MacDonald), feisty Scottish lass who isn’t so pleased to learn that her future husband will be determined by a series of contests.  She won’t have a part in it and instead bests her potential grooms and claims her future for herself.  As fate would have it, a chance encounter with a witch throws a wrench in the works when Queen Elinor (voiced by Emma Thompson) is turned into, well, a bear.  Yeah, a bear.  Merida has only 48 hours (or in fairy-tale vernacular, the second day’s sundown) in which to reverse this spell else the spell is permanent.  To add to the stress, Merida also has to save the kingdom from another bear that’s terrorized the inhabitants for years.  Can this ginger do it all?

As I sit and look at my Pixar collection on Blu-ray, I remember that there have been some great movies produced by that studio.  I’m talking about ones that have made me laugh and, yes, even cry.  The Toy Story movies will no doubt ever be topped.  My personal favorite of the bunch is The Incredibles with Ratatouille being a close second.  However with Pixar’s latest efforts, I’m hesitant to say that they might have lost their touch.  I think the days might be gone in which gems like Monsters, Inc. and Wall-E are going to be produced.  Now that’s not to say that Brave isn’t a good movie.  It is.  It’s well-made, entertaining and should please audiences.  One thing I felt was missing from the movie was the element of humor.  That’s something that the Pixar movies have been known for is the ability for a film to please both children and adults with some witty dialogue.  Brave was nearly an all-out action movie that seemed to lack that human component. It made plenty of money, of course, but for me it’s near the bottom of my list when it comes to Pixar films.

There are are few “rules” that I’ve abided by in my reviews. One is that mostly any Pixar movie, regardless of format, will tend to look amazing on any sort of display. That’s essentially been the case from the get go. The other is that with the advent of 4K discs, the picture will generally look as good as it can. That too is true. And when you combine those two “rules” logically it would lend itself to the inevitable conclusion that Brave will simply look stunning on its 4K debut. And it does. Our lead has a mane of fiery red hair complete with curls and darn it if I couldn’t count each individual strand of hair.  Detail is simply stunning from the texture on the bear’s hide to the definition of the leaves in the forest.  I’m perpetually dumbfounded at how good these animated films look.  Colors are bold and bright with the dark scenes revealing no errors.  Black levels and contrast are right on the mark as well.  When you put a Pixar disc into your player, you know one thing – you’ll get an outstanding-looking transfer and that’s yet again the case here.

When Brave first hit Blu-ray, the DTS HD Master Audio mix was more than adequate. But this new 4K version has bumped it up to a Dolby Atmos mix that’s sure to please. The vocal actors are nearly all Scots (Billy Connolly, Craig Ferguson, etc.) and their accent comes through with no distortion in the least.  Vocals are simply that crisp and clear.  The soundtrack pulls no punches as all channels are active and engaged from the opening credits to the closing.  The sound the arrows make while passing through the speakers, the growl of the bears and even the crackling of fire all sound like they’re in your living room.  I could go on and on, but suffice it to say that on a technical level this movie is on par with the other Pixar films and that’s most certainly a good thing.

We start off with an audio commentary by director Mark Andrews, co-director Steve Purcell and the script supervisor Brian Larsen.  The group is very chatty and give us loads of information, the back story, casting the actor’s for their voices and everything in between.  We get a couple of short films: La Luna and The Legend of Mordu, in the vein of some of the others included on Pixar discs.  Next up is a slew of Behind the Scenes featurettes, eight in all.  These range from the casting of Merida to the design and animation.  We get some insight into some of the key sequences of the film as well as getting to meet the creative group that came up with the film. I’m still in awe of exactly how much time, effort and energy it takes to make one of these films.  Rounding out the supplements on the first disc are some extended scenes (four, total).

The second disc contains the remainder of the supplements with the third disc being a digital copy of the film and a DVD of it as well.  We start out with an alternate opening that obviously wasn’t used, though we get more of a rough version as to what it looked like.  Some promotional pieces contain a few deleted scenes here and there and some footage from around the globe.  “Fallen Warriors” is a montage of some shots that nearly made the final cut, but not quite.  “Dirty Hairy People” is just that – the look of the characters in the film with their physical appearance.  We also get an ear full with “It is English…sort of” and Pixar’s take on the Scottish accent.  “Angus” is a look at what was involved in designing the Merida’s horse.  “The Tapestry” is showcased and its part in the film is explained.  We round out the supplements with some art galleries that cover “Color Keys”, “Characters”, “Developmental Art”, “Environments” and finally “Graphics.”

Brave might not be one of Pixar’s best films, but after a few years I did enjoy seeing it again. The upgrade to 4K contains reference-quality audio and video and retains the supplements found on the Blu-ray.  Like many of the other Pixar films on 4K, I wouldn’t necessarily recommend an upgrade unless you don’t already own the disc and are assembling a 4K library.