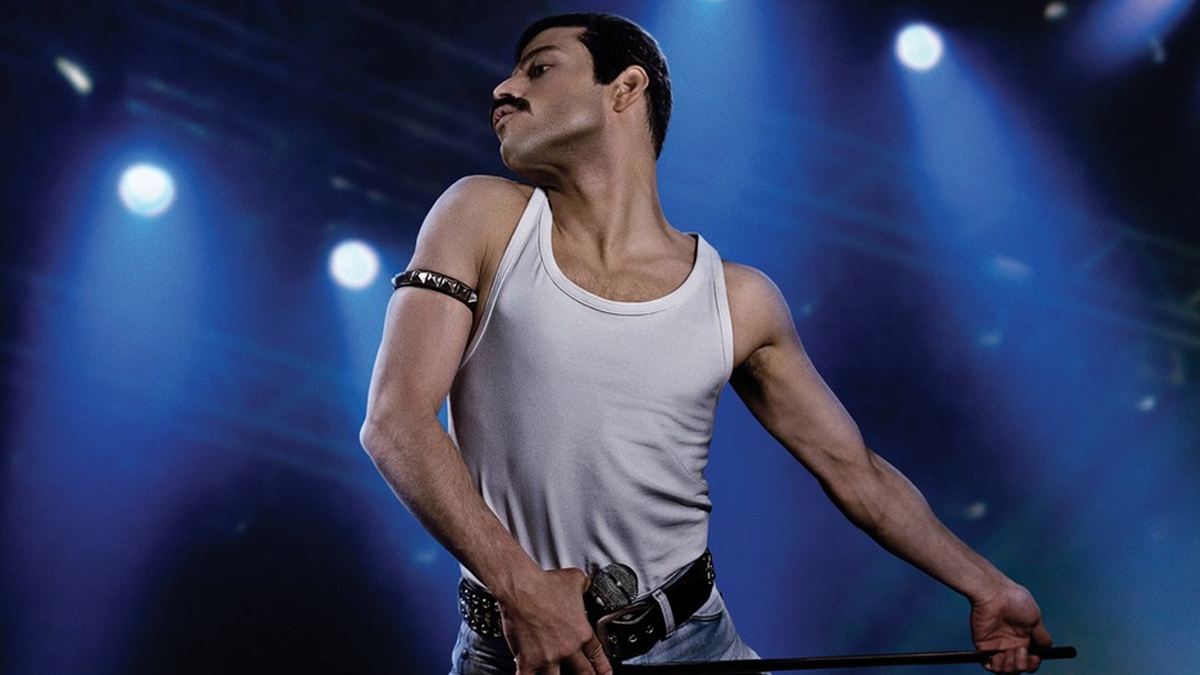 Is it strange that I discovered Queen in 1992 after seeing Wayne’s World? I do find that odd. Sure, I’d heard some of their songs like “We Will Rock You” and “We are the Champions”, but it wasn’t until Mike Myers and Dana Carvey (as Wayne and Garth in the aforementioned film) sung “Bohemian Rhapsody” that I really took notice. I can’t be alone with this. Nevertheless, I became a fan and now celebrate their entire catalog. But the band Queen is more than the sum of its parts and don’t let anyone tell you that one man can’t make a difference. Charismatic frontman Freddie Mercury was the face, heart and soul of the band and he sadly lost his battle with AIDS on November 24, 1991 (ironically just three weeks to the day after Magic Johnson announced he was HIV positive). Bohemian Rhapsody is the child of band members Roger Taylor and Brian May. The duo wrote the script and have been trying to get the film made for over a decade. The wait is over. The results are in. It rocks (and rolls)!

The film chronicles the rise of Queen from its early days. We meet Farrokh Bulsara who would later become Freddie Mercury (Rami Malek) as we see some elements of his pre-fame life. He worked as a baggage handler in Heathrow airport and hooked up with band members Brian May (Gwilym Lee), Roger Taylor (Ben Hardy) and John Deacon (Joe Mazzello) to form Queen. We’re introduced to their experimental type of music including a six minute rock anthem that didn’t sit too well with record executives. Nevertheless their fans couldn’t get enough. We follow the rise of the band including some prima donna behavior from Mercury who starts to think that he’s more important to the band than the other members. We follow his solo career and the band’s eventual reformation culminating at the Live Aid concert. It’s a 134 minute crash course in anything and everything that was Queen.

I watched Bohemian Rhapsody and A Star is Born on successive nights. Both are similarly-themed, both well-made, but I found the latter much more enjoyable. If you’re into toe-tapping films that get your blood pumping, this one did the trick for me. The labor of love project exceeded all expectations and it goes without saying that Rami Malek knocked it out of the park as Freddie Mercury. Indeed, there might be a new generation of Queen fans as a result of this film. The film does tend to gloss over the sex life of Freddie and we don’t get into his later years as he suffered from AIDS. That’s something that Straight Outta Compton tried to handle and the film just kept dragging. Director Bryan Singer (The Usual Suspects, X-Men) has done a fine job and the film serves as a tribute to arguably one of the greatest rock bands the world has ever seen.

Bohemian Rhapsody parades its way onto the 4K format looking, well, perfect. As good as some films look these days, it’s a rare breed that finds me at a loss for something to nitpick. Simply put, it’s amazing. Astounding. It dazzles. Colors, thanks to the HDR, have an increased depth compared to the included Blu-ray. Detail, be it in Freddie’s amazing ‘stache or Brian May’s mass of hair, is razor sharp. The Live Aid concert looked so real that my mother (who watched the film with me) asked if it was archival footage. I honestly cannot find anything wrong with this 2.39:1 HEVC 4K image. Kudos to Fox on a job well done!

If ever there was cause for a film to have a Dolby Atmos (or DTS X) soundtrack, it’s with Bohemian Rhapsody. Queen’s iconic sound has never been better and we hear some of their best-known hits in all their uncompressed glory. Vocals are pure as virgin snow, crisp and sharp. Malek must have had a time with the false teeth in his mouth, but we get an honest sense of what Freddie must have sounded like. The toe-tapping “thump” of “We Will Rock You” gives new meaning to bass. All in all this too is a winner. It’s a shame that the Blu-ray features a DTS HD Master Audio track that sounds good, but not to the level of Dolby Atmos.

Bohemian Rhapsody has been a long time in the making, but I’d have to say that it was worth the wait. The cast is full of relative unknowns, but that’s part of the allure and charm that makes it work. Fox’s disc contains a smattering of extras, though none are too in-depth. Most of all, the movie looks and sounds simply amazing. Fans of Queen or fans of an entertaining film will want to add this one to their collection.