A mission to capture a Somalian warlord, Mohamed Farrah Aidid, was supposed to be a routine one, a mere half hour or so excursion. Aidid and his forces had been a cancer to the people of Somalia, stealing shipments of food and supplies, shipments that were intended to keep the locals alive. Instead, the shipments were taken by the warlords and as a result, hundreds of thousands of people died of starvation. So action needed to be taken, in order to restore order to the area and get relief to those still alive. As such, a team of elite Army Rangers was dispatched to the capital city of Mogadishu. The men were transported in by helicopter and led by Capt. Mike Steele (Jason Isaacs), with orders to hunt down some of Aidid’s lieutenants. But the mission didn’t go off as planned, as two Black Hawk helicopters were shot down, which was just the start to a horrific, drawn out battle in Mogadishu. The enemy forces numbered in the hundreds and were well armed, so gun battles were intense and explosive. Those that survived the harsh arrival found themselves trapped, as the forces of the warlords surrounded them. A number of additional problems also arose, ones which complicated the arrival of more soldiers and supplies. As the enemy closes in, the survivors hold firm, but time is starting to run out…

This is not your typical war movie, as it doesn’t deal as much with personal stories, emotional content, or grandiose heroics, just the sheer chaos of the conflict. This seems to fit director Ridley Scott’s talents well, as he is a very visual director and here, he can use the madness to create some memorable sights. The film does have some personal storylines within the main premise, but the movie switches between them so often and covers so many characters, not enough is spent with them to develop much. You’ll still find some emotion in Black Hawk Down, especially since this was based on real life events, but this isn’t a Saving Private Ryan kind of movie, it tends to focus on the action and visuals. And with Scott and producer Jerry Bruckheimer present, you know those elements are in full effect and well crafted. The film is packed with massive explosions, intense gun battles, and other impact elements, all of which are realistic and effective. As far as creation of a tense, believable war atmosphere, Black Hawk Down is excellent. And of course, I should mention that this movie took home two Oscars, one for Best Editing and the other for Best Sound. But without sufficient emotional presence and character development, Black Hawk Down is unable to rise above its flaws. I found it to be a solid popcorn flick in all respects, but it’s just too thin on the storylines.

This movie moves between storylines and highlights numerous performers, so there isn’t a lead, at not in the typical sense. But if I had to pick someone, it would be Josh Hartnett, who seems to pop up more often than the others. If you’ve seen some of Hartnett’s other performances, you know that isn’t the best news. I have never been much of a fan of his work, but in a few films, Hartnett has been solid and shown potential. But he has slid back down since those, to his usual effortless performances. Hartnett injects minimal emotion into his role and in truth, he doesn’t even seem like he’s awake half the time. That is terrible in this case, since he is in the middle of an intense battle and should be alert & responsive. So whenever he is on screen, the movie tends to grind down and be less effective. It picks back up again when the movie switches focus again, but Hartnett is a real drag on Black Hawk Down. So perhaps if someone else would have been cast in his role, this could have been that much better.

Black Hawk Down has looked good in every incarnation of the DVD and Blu-ray formats, so it would stand to reason that this 4K version would be the best-looking yet. And it is. The filmmakers used some special visual techniques to create a dark, gritty style, so don’t expect a pristine presentation. The visuals have a worn, dirty texture, so grain is enhanced and colors are muted, but keep in mind, this is intentional. This is further personified by the HDR and its use of color and shadows to give an every more impressive transfer. The hues have a dark, dull presence, while black levels are stark, so detail is consistent. This is a hard transfer to judge on the usual scale, but the visuals reflect the theatrical presentation, so all is well here.

Generally speaking, when a film takes home the Oscar for Best Sound, it’s for a reason. I’ve heard this in a Dolby Digital format and others, but I was really looking forward to hearing this new Atmos mix. And I wasn’t let down. It has all the power to burn and handles more reserved scenes well, but there’s a small level of refinement that is absent, something I just can’t put my finger on. Even so, this mix is dynamic and effective, so I can’t imagine anyone being let down here. The surrounds pulse, rumble, explode, and blast, thanks to the constant war atmosphere in Black Hawk Down. So your system will be put through its paces throughout this movie, as the audio never lets up, save for a few calm moments. The music has a lot of life also, while the dialogue remains clean and audible, despite the immense amount of background noise and explosive content. This is, hands down, one of the most explosive mixes I’ve ever heard (pun fully intended).

If memory serves, and with the thousands of discs we’ve reviewed that’s never a certainty, there was a three disc version that came out in the past. This new 4K disc seems to include all of that bonus material, though it seems that no new supplements have been added. Nevertheless…

Gritty and almost surreal, Black Hawk Down dazzles on the 4K format. This is, by far, the best the film has ever looked and sounded and all of the supplements from the previously-released Deluxe Edition have made the leap. To top it off, we get the theatrical and extended version (the Blu-ray contains the theatrical version only). Fans of this film or war movies in general shouldn’t hesitate to add this to their collection. 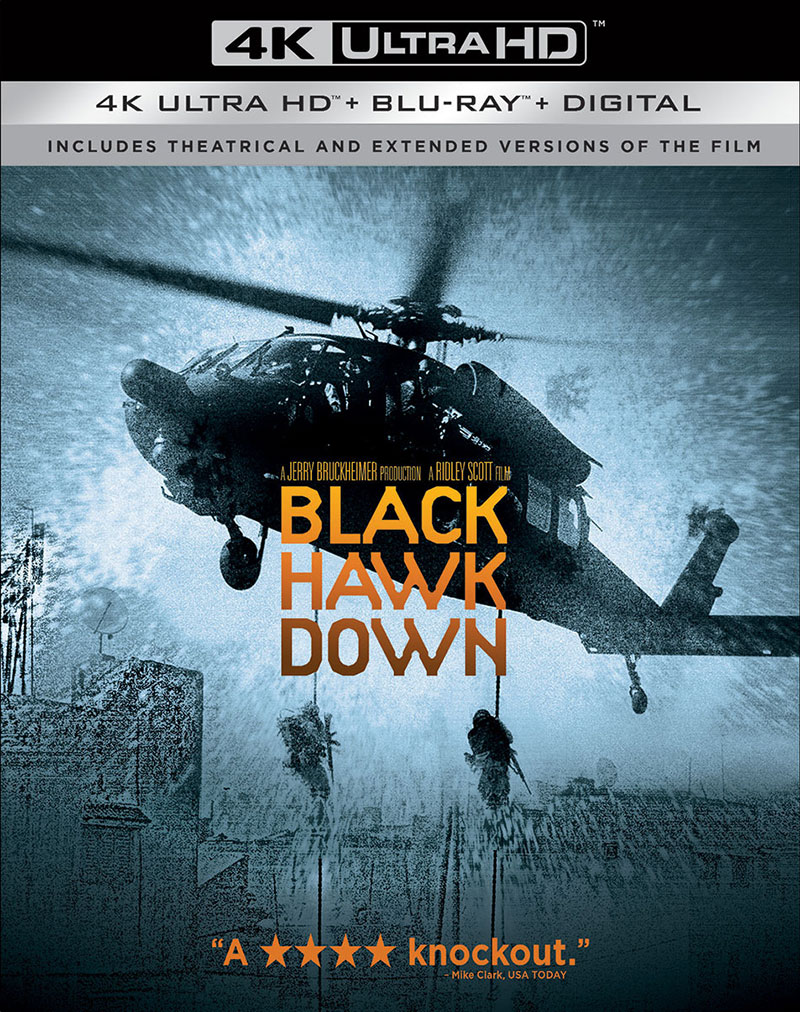