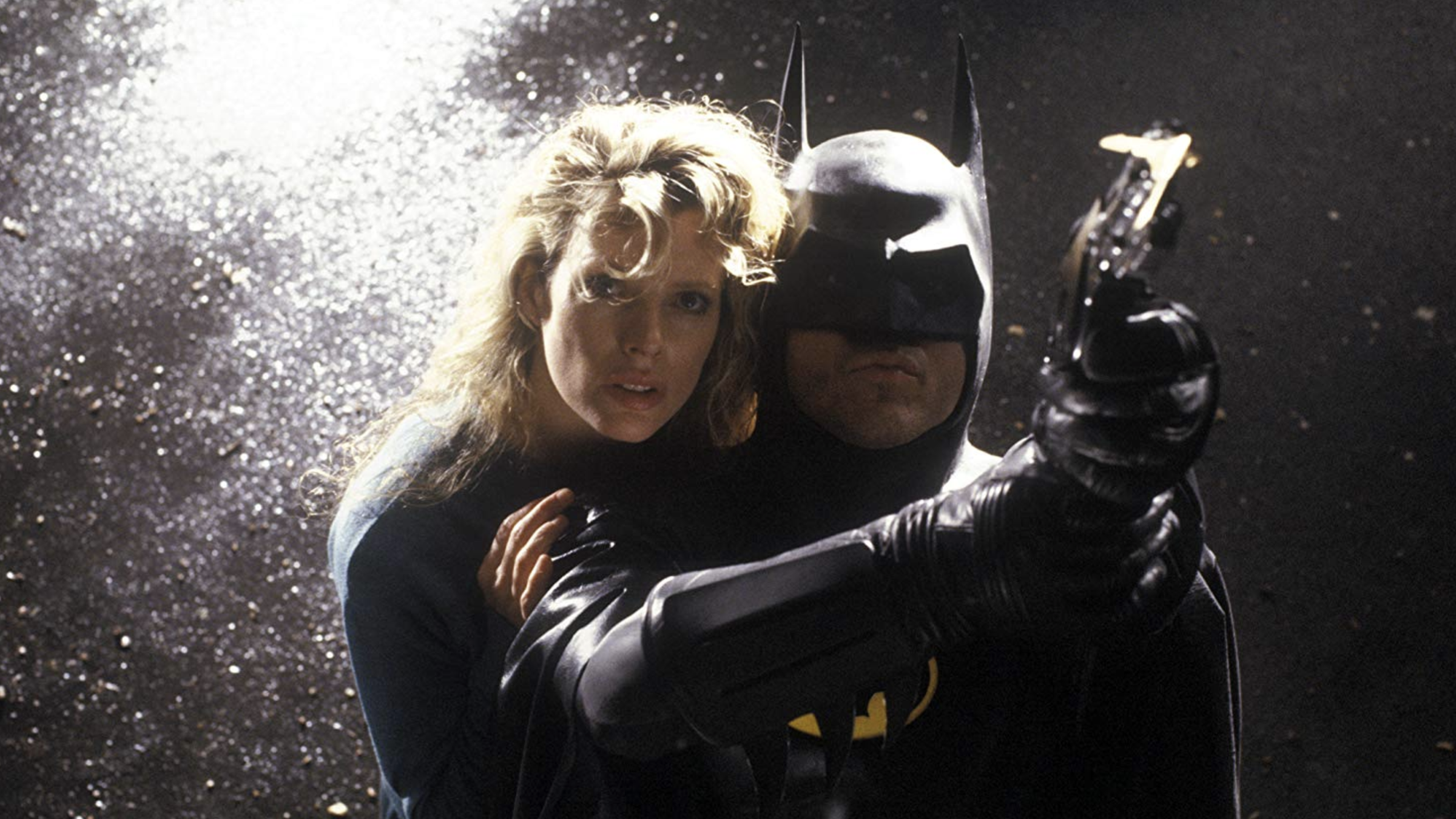 The summer is where this viewer has had some of the best memories with big pictures and none came bigger than in the year 1989 when Indiana Jones went for the holy grail without bumping into Monty Python, Captain Kirk had his first outing in the directors chair, and Hulk Hogan tried to be an action star. Among all of that was one film that was talked about, trailered about but nothing was seen fully and I can recall going into the wrong theater where they extended this film to 3 screens. Luckily I had spent the better part of a brother’s graduation reading the novelization and guiding my group to the right theater. This would go down as a big summer and a film that I viewed two more times after the first and one time many years after its release on the big screen. A symbol, a hero, the legend that is Batman.

It is Gotham City and crime lurks in the night and out of the darkness leads a cowled individual with fists and weapons to his choosing. He wants the hoods to know his name and spread the word that the Batman is out. At the same time, a man named Jack (Jack Nicholson) is in charge of a crime bosses operation at a chemical plant. It’s this assignment that not only alerts the caped crusader but also comes down to Jack’s fate as he is dipped in toxic waste and comes out in a new guise as The Joker. Out of it all is a pretty woman (Kim Basinger) who falls in love with the caped crusader’s alter ego Bruce Wayne (Michael Keaton) unaware that the Joker in his spree of crime has a weakness for the same woman too.

It’s been so many years and some people feel nostalgia can be a sketchy influence on an opinion but not to this one. It is many years and even though the prequel did an amazing job reinventing series, it couldn’t have been as good without this one. This was one that made others think of doing their own comic book movie and its thanks to the right bit of casting even though at the time the casting of the main character was doubtful and everything around from the production value to the big exclamation mark to credits.

No matter how many times I am either a passenger or the driver of a vehicle, whenever I am at a long turn, it always makes me think of the title sequence that forms the bat symbol. From beginning to end, Batman entertains, thrills and captures the dark spirit of the comic book as well as adding a few little touches here and there cinematically. Michael Keaton played the Caped Crusader beautifully through two movies and seeing this original should be a reminder as to why the third and fourth movies failed miserably.

Where the first two stuck to the darkness in the right direction, the other two played for the younger audience and thus even though it looked like great eye candy, failed to give us what we had built up in the first place with the first film and it had some of the best elements and this viewer feels the best comic book movies are the ones that have one central villain of the piece even though the prequel managed to make a nice balance of the rogues gallery involved and Jack Nicholson makes the giddy sinister madman a reality in playing The Joker.

Major props do go to director Burton who makes the impossible task of bringing the caped crusader to the big screen in all seriousness a reality and with that task paved the way for others to take their stab at the illustrated multicolor pages translated to the big screen.

No matter how many Batman movies come about in every which way, the very first Batman movie away from the Adam West-Burt Ward version, will always have a special place with this reviewer for it provided a great big screen summer and provided in addition a great entertaining film.

The term “leaps and bounds” apply to this 4K release as the 1.85:1 HEVC 4K is exactly that in terms of the overall look of the film captured on a superior video source such as this one. Like a lot of other 4K offerings, this one really shows the true depth, detail and dimension that Burton was trying to achieve. It’s a dark movie. Most Batman films are. Contrast is strong, though what really grabbed me were the interior shots. Some of the daytime scenes in Gotham City seem to have a much more natural and warmth to them that’s simply not present in earlier releases. The film is three decades old, but honestly it’s hard to tell as this is certainly one of Warner’s finest offerings.

From the front to the back, the new Dolby Atmos track certainly makes great use of the effects and the great score of Danny Elfman in terms of separation and balance. Batman was, for a long time, one of the reference standards for surround sound. Granted today’s modern films are no comparison, but just hearing all of the tiny little nuances present in this track really took me by surprise. Clicks, whirrs and the grandiose scale of Elfman’s masterpiece are all on display here. Vocals are, of course, in top form. This is, simply put, one hell of a good-sounding track that benefits from a new Dolby Atmos mix.

I’ve lost count of how many Batman movies there are. I’ve also lost count of the actors that have played him. Nevertheless Tim Burton’s 1989 version remains, perhaps, the best of them all. And that’s a bold statement as Christopher Nolan’s Dark Knight trilogy is nothing to balk at. Warner’s 4K restoration of Batman is divine. The upgraded picture and audio qualities are beyond reproach. There aren’t many 4K films that are required to be in your library, but this is one of them.