If imitation is the most sincere form of flattery, then Quentin Tarantino must be among the most flattered people in the world (or at least the filmmaking world). As of this writing, it’s now been 25 years, yes a quarter of a century, since he gave us Pulp Fiction. The movie was bold, ahead of its time and has earned just about every accolade out there. And with good reason. It’s an amazing film. Flash forward a few decades and we’ve got Bad Times at the El Royale. I’d seen the previews, but what most intrigued me about this film wasn’t the cast (though it’s impressive), but rather the writer/director – Drew Goddard. For those that don’t know, Goddard was the man behind a cult favorite – The Cabin in the Woods. He also wrote a slew of episodes of Lost as well as the screenplay for two of my recent favorites: The Martian and World War Z. The dude’s got talent. So if his intent was to do a Tarantino-esque film, I’m in. Let’s get started.

We’re treated to a prequel with a man checking into a hotel, removing the carpet and burying a satchel under the floorboards. No sooner does he get the job done than he’s killed. It’s Lake Tahoe, Nevada/California and it’s the end of the 60’s. We meet a salesman (Jon Hamm), a priest (Jeff Bridges) and a singer (Cynthia Erivo) which sounds like the setup to a bad joke. But these three are joined by the hotel manager (Lewis Pullman, Bill’s son) and they’re soon met by a hippie (Dakota Johnson) with her kidnapped victim (Cailee Spaeny) and later on a Manson-like cult leader (Chris Hemsworth). It goes without saying that none of these people are really who they purport to be. Hamm’s character works for the CIA, the priest is there to try and retrieve the satchel and we’ll just say that the number of skeleton’s in the hotel manager’s closet is in the hundreds. Seven strangers, one rainy night – what could possibly go wrong?

I’d alluded that this was more of an homage to Pulp Fiction, but in all fairness it’s more of The Hateful Eight meets No Country for Old Men. But if you’re going to pay homage to filmmakers, you could do a lot worse than Quentin Tarantino and the Coen Brothers, don’t ya think? Ok, the good: I enjoyed the performances by all. I won’t say who, but don’t get attached to any one character. Some meet their demise and others, well, don’t. I felt that the running time was about 20 minutes too long, but it’s for a reason – every character gets their own backstory complete with title card (how very Wes Anderson/Tarantino’ish). No character is underdeveloped. And I didn’t feel the movie dragged, but there was just something…off. I’ll need to watch it again. And I usually don’t do that. Still, I’m a fan of Goddard and look forward to his next project. And for those that were curious, yes this is worth a viewing.

The lion’s share of the film takes place at night either indoors or outside in the rain. Neither one of those settings is optimal for a razor sharp picture, but I didn’t find a lot to nitpick with the way Bad Times at the El Royal looked. The 2.39:1 HEVC 4K image certainly looks the part and when you can see individual droplets of rain and sweat – that’s an indication of a good-looking picture. Contrast is strong and heavy, the blacks of the shadows (or walkway behind the rooms) isn’t compromised in the least. Flesh tones are natural-looking and as we might expect, detail is tack sharp. Again, nothing to really complain about here.

No, that’s not a typo, Fox is actually putting Dolby Atmos soundtracks on their titles now (yes, I know they’ve done it in the past). This is solid-sounding track that’s got a fair share of diversity in addition to the ambiance that rain can provide. We get a good array of songs from the 60’s, so if those are your thing then you’ll be right at home, tapping your toes to the tunes.  Vocals are robust and pure. Some of the atmospheric effects really do the trick, when pouring down rain sounds like it’s in your kitchen (the room behind my viewing room), I’d say the soundtrack is doing a good job. Those who don’t spring for the 4K version will not get the Atmos track, rather a DTS HD Master Audio 7.1 mix which is, by no means, bad.

It’s not perfect and it’s not Pulp Fiction, but it does have a certain Tarantino-esque vibe to it. Some will love it, others not so much. It will keep you guessing and I did feel that I was ultimately entertained and that’s the point. Fox’s 4K disc looks and sounds great, though the lack of any substantial features might be a turn off for most. 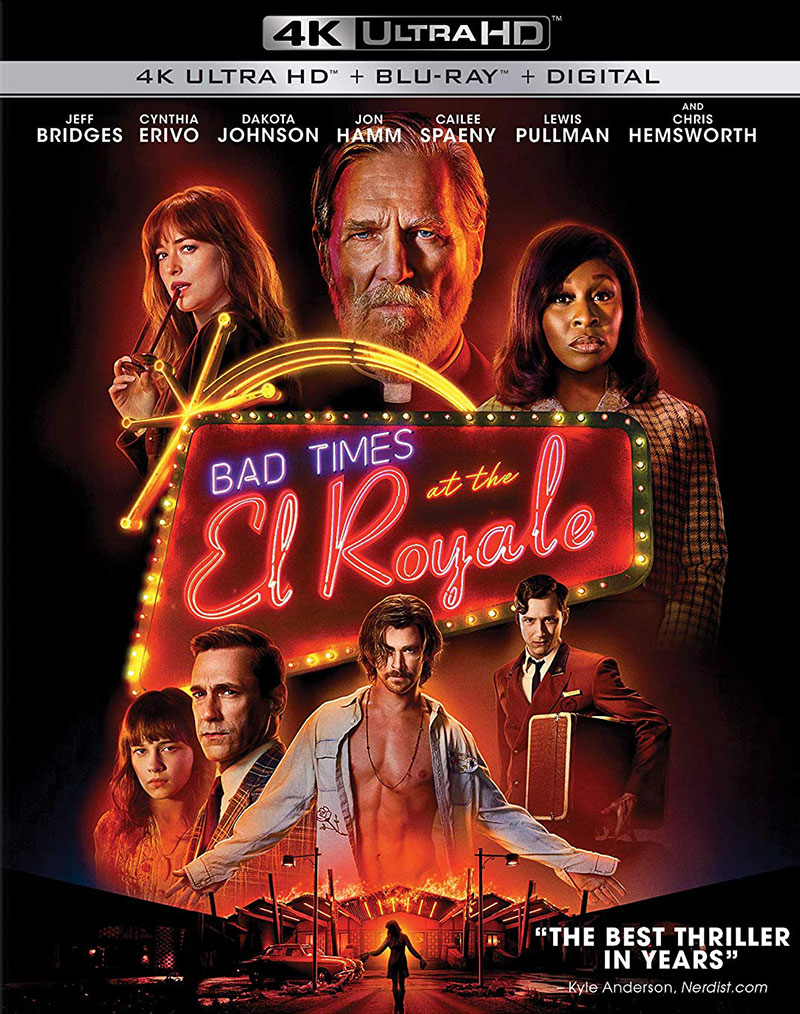