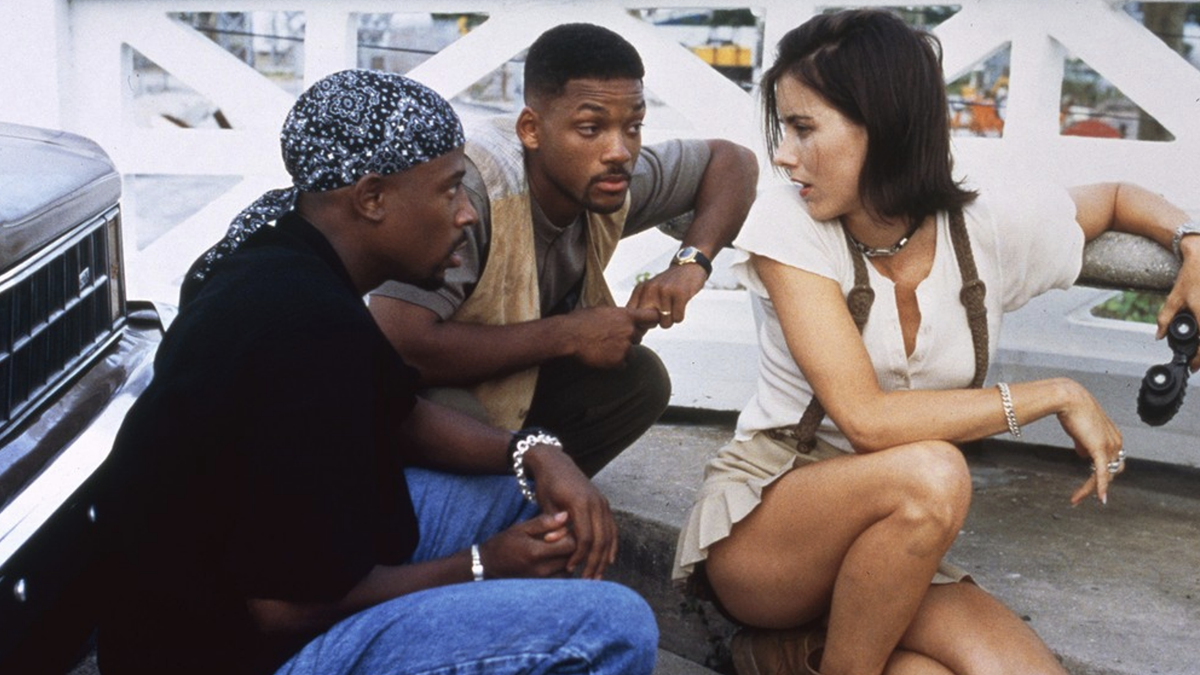 It might seem a like such a long time ago that Will Smith was just a musician. I suppose he technically still is, but as we all know he’s spent more of his time on a movie screen than in a recording studio. Couple that with Martin Lawrence, the foul-mouthed comedian and it must have been a match made in heaven when casting for Bad Boys was underway. The 1995 film managed a decent take at the box office ($65 million in 1995 dollars), but it showed that Smith had the screen charisma to carry a film. And so he did in 1996’s Independence Day and 1997’s Men in Black (there are a few other films he’s been in, too). It would be eight more years before we saw a sequel, the aptly-titled Bad Boys II.

Approximately $100 million in Heroin has been stolen from under the nose of the L.A.P.D. Believing that this couldn’t happen, they quickly deduce it’s an inside job. We meet Marcus Burnett (Martin Lawrence), a married father of three who seems to never have the time to enjoy time with his wife. Conversely, we meet Mike Lowrey (Will Smith), a swinging bachelor who has a hefty inheritance from his family and can’t keep up with all of his girlfriends. Escort Julie Mott (Tea Leoni) happens witnesses her friend’s murder and narrowly escapes being shot herself. The police need to find as she is the only material witness of this crime. Now the whole thing ties together when Julie is taken to Lowrey’s place, but it’s Burnett who brings her. Trying not to confuse her (and us) anymore, they go through most of the movie pretending to be each other. While interesting at first, we quickly put the pieces of the puzzle together.

Smith and Lawrence reprise their respective roles and reunite with director Michael Bay along with producer Jerry Bruckheimer. This time around they’re trying to track down a Cuban drug dealer who is smuggling boatloads of Ecstasy into the country. Marcus’s sister Syd (Gabrielle Union) is an undercover DEA agent and has managed to infiltrated the dealer’s business by helping him launder his drug money. Unbeknownst to Marcus is romantically involved with Mike. The trio then follow the trail of drugs to a KKK rally, a nightclub run by Russian mobster (Peter Stormare) and then finally heading to Cuba.

The Bad Boys films won’t challenge your intellect. They’re fun, a bit dated and a good way to kill a couple of hours. Though the bloated running time on Bad Boys II is nearly two and a half hours? Isn’t that a little much? I see nothing wrong with watching these movies and given that we’ve got eight Fast and Furious movies (and counting), I don’t think we can hold Michael Bay accountable for too much wrong doing. Smith and Lawrence, like most great on-screen duos, have amazing chemistry. My advice, providing you haven’t seen either of these films, is check you mind at the door and have a good time. My advice if you have seen them is to do the same thing.

Nearly every studio puts out Ultra HD/4K titles but only a few of them do it right and, as you might have guessed, Sony is leading the pack. Of the two, Bad Boys shows the most improvement. Being the older title, that’s obvious. The 1.85:1 HEVC 4K image shows a lot more depth, detail and image clarity than its Blu-ray predecessor. The film also benefits from the additional color of HDR which gives the golden hues of Miami a bit more warmth (not that it was needed). Bad Boys II already looked pretty good from its Blu-ray release a few years back. That said, the 2.39:1 HEVC 4K image of the sequel also benefits from HDR and improving on the detail, if only by a hair. Both films look positively stunning and it’s a tip of the hat to Sony who consistently seems to knock it out of the park.

Both films have gotten the Dolby Atmos treatment and it’s a welcome change from the previously-issued DTS HD Master Audio found on the Blu-ray’s. Understandably, Bad Boys II is 8 years newer and, thus, benefits a bit more from technology. Still, the original manages to pack a punch. A very active matrix of sound positively radiates out of every channel, and the sub gets it’s share of the action as well. Dialogue is very clean. We can hear every curse word that Will Smith and Martin Lawrence spew forth (which are plentiful)! Though explosions and bullets whizzing by activate the surrounds, it seems that action sequences are a bit few and far between, hence the real action of the audio is few and far between. Sony has done a fine job with this Atmos mix on both films which should leave the viewer amply-satisfied.

As per usual, no new supplements were added to this Ultra HD release. Both movies contain their Blu-ray counterparts which have the pre-existing features.  Understandably, Bad Boys II is 8 years newer and, thus, benefits a bit more from technology. Still, the original manages to pack a punch.

The Bad Boys films aren’t exactly an acquired taste, rather a guilty pleasure. The first showed that Will Smith could carry a movie and the second showed that even after he was an established star, was not afraid to go back to his roots. Sony’s 4K presentations of both are off the charts, visually and in regards to audio. Though no new supplements have been added, this is a good set to have if you don’t already own the Blu-ray’s.