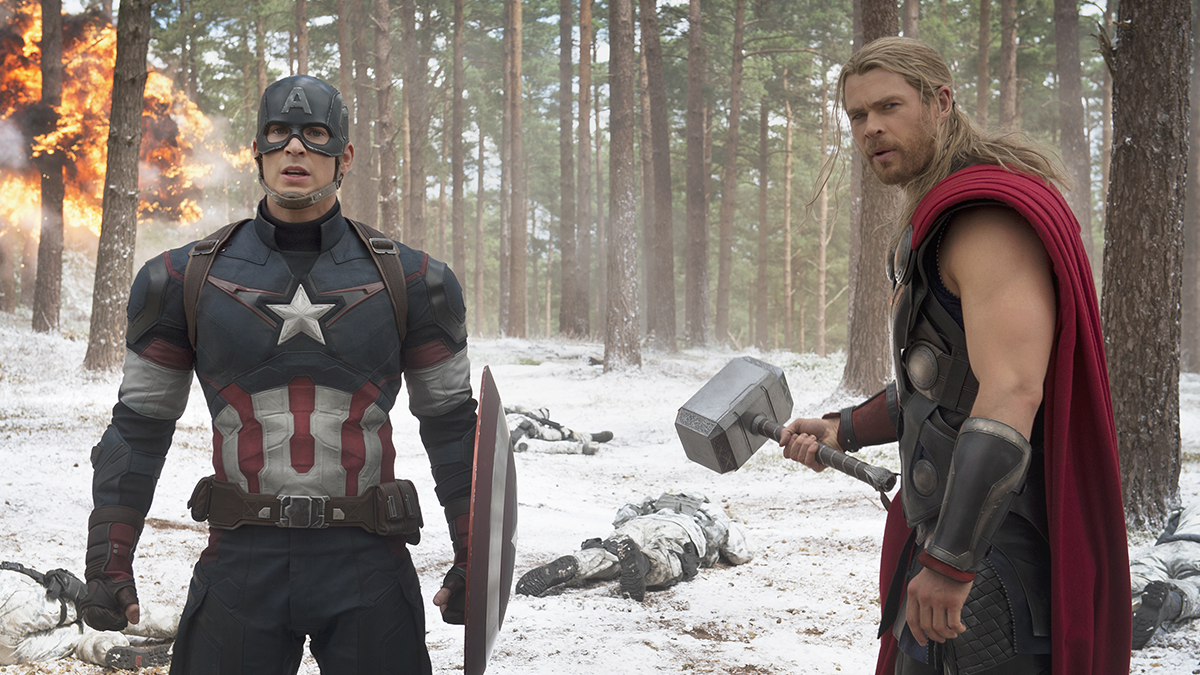 The other day I was watching Captain America. No, not that one. I’m referring to the one that came out in the early 90’s. My how things have changed. The Marvel Universe (look for that term several more times throughout the body of this review, by the way) is something that’s driving films and has been for the last several years. But…here’s the thing – it’s mostly all connected. For those that don’t know, there are some odd things with the studios. Fox owns X-Men and Fantastic Four, Sony has Spider-Man and Marvel Studios essentially has the rest. So when you see the character of Quicksilver in X-Men: Days of Future Past and Quicksilver in this film and wonder why they’re played by two different people – there’s your answer. But I digress. The “modern” era of Marvel films really started back in 2008 when Robert Downey Jr. had a drink, donned a suit of armor and the rest, as they say, is history. Over the past few years we’ve been treated to more Marvel films like Thor, Guardians of the Galaxy and most recently some rather offbeat ones like Ant-Man. There are more coming and it’s all part of a master plan.  Still, the film at hand is Avengers: Age of Ultron – the follow-up to the #1 movie of 2012. That’s a lot of pressure. Are Earth’s Mightiest Heroes up to the challenge?

First off, there is a LOT going on in this film and it’s nearly impossible to list it all without giving away vital plot points, but we have to get started somewhere, so…We jump right in with a James Bond esque intro as we see the Avengers finishing up a mission which segues into the main film. Ever the tinkerer, Tony Stark (Robert Downey Jr.) attempts to jumpstart a doormat peacekeeping program, but it goes awry. What emerges is a literal hodgepodge of a robot who dons himself Ultron (voiced by James Spader). Ultron isn’t your typical machine and immediately uses the information available to him to take charge. He eliminates J.A.R.V.I.S. and is convinced that to save the Earth, the human race must be exterminated. Ultron then enlists the help of Wanda (Elizabeth Olsen) and Pietro (Aaron Taylor-Johnson) Maximoff (aka the Scarlet Witch and Quicksilver respectively) who summarily controls a few of the Avengers’ emotions causing some turmoil. Don’t let this distract you from the overall plot/villan – Ultron. Ultron then creates Vision (voiced by Paul Bethany, who also voiced J.A.R.V.I.S. in other Marvel films) who may or may not side with his creator. Will the Avengers be able to overcome their own troubles, band together and save the world or are they doomed?

I’ll state the obvious: this movie is a blast to watch. It’s everything that makes movie-watching fun and it’s all about the fun, right?  The actors are well-suited (pardon the pun) for their respective roles, especially those that have had their own films (Iron Man, Captain America and Thor), though there isn’t a lot of time for part of what made this movie’s predecessor great. Namely the lack of Loki and the usual banter between some of the heroes. Yes, there’s a somewhat pointless scene where they try and lift Thor’s hammer, but aside from that – it’s all business this time around. James Spader gives literal life to the Ultron character, his low and menacing voice make him a true villain.  There’s action galore, we see new knick knacks and Hawkeye doesn’t spend this movie in a trance. This was provides a nice and fitting end to the Phase II movies (though Ant-Man did follow it) and if you’re at all confused about the grand scheme of the Marvel Universe – check this out.

Ok, look, who are we kidding here? Before even putting in the disc, I was pretty sure that this would both look and sound (see below) amazing. We get an uptick in picture quality (albeit very slight) and the enhanced HDR makes for a more “colorful” image throughout.  The 2.40:1 HEVC 4K image is anything and everything we’ve come to expect from a big Summer blockbuster and this is obviously one of the marquee titles of the year. The main thing that really stuck out to me was the detail. Be it the energy source in Ultra’s eyes, the nuances in the costumes, the scrapes in Iron Man’s armor…you get the idea. Colors are a bit bumped up though the natural color palette seems to work here. I’d have been surprised if this looked anything less than perfect, but it’s no surprise that it looks as good as it does.

Again, let’s be real shall we? The upgraded Dolby Atmos mix is one for the ages. We’re talking about a film with an army of flying robots an 8 foot green monster that battles a man in a giant suit of armor and the God of Thunder that wields a hammer that can shake the Earth. So, yeah, things are gonna get a bit loud. Nevertheless, this delivers on all accounts. I can say how the LFE are used pretty much all the time and how the surrounds get a workout from beginning to end, but we all know that. When you put this disc in the player, you’ll know what you’re getting pretty quickly.

There really isn’t a call for a ton of extras as Marvel studios knows that this could be a movie-only disc and it’ll still be a top seller. Still, there is a decent offering included though it’s notable that a Digital HD Copy is not included with this set.

The Marvel films are the driving force in theaters these days and the Avengers is the grand daddy of them all. This long-awaited sequel wasn’t quite up to the same standard set by its predecessor, but it was close. The Blu-ray delivers top notch audio and video presentations and the supplements, while not hours upon hours of material, are somewhat entertaining. This is pretty much a must own.