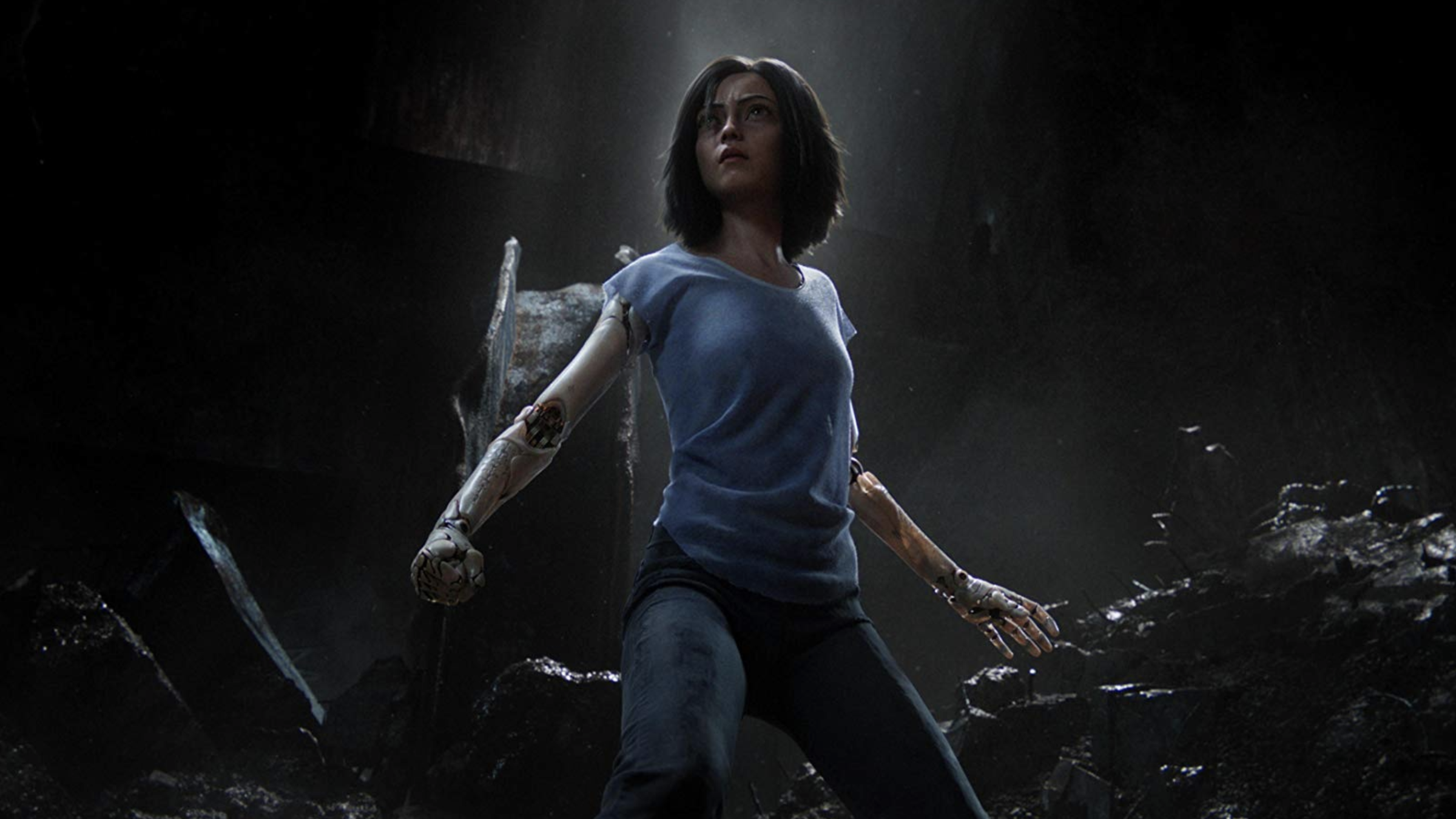 I have to admit that I had zero idea what Alita: Battle Angel was about when I put the disc in the player. Judging a book by its cover, which we should all do by the way, it appears as if it’s some sort of video game. It’s not. But that comes with the territory when you go on appearances. However, when I dug a bit deeper, I saw that it’s a film from two of my favorite directors: Robert Rodriguez (who actually directed the film) and James Cameron, who wrote the screenplay. Add to that, it looked like and reminded me of one of my recent favorites – Ready Player One. Let’s see how it stacks up.

The year is 2563 and a devastating war has taken place. The planet is in a state of wreckage. A wealthy city in the sky, Zalem, tosses its waste down to Iron City, a scrapyard on the surface. It’s then that Dr. Dyson Ido (Christoph Waltz) finds the head of a deactivated female cyborg. He takes it to his lab where he manages to bring it back to life. This is, of course, Alita (Rosa Salazar). She has no memories of the past, but it’s quickly deduced that she has ties to Zalem. Along the way the plot wanders a bit when we meet some of the supporting characters: Vector (Mahershala Ali), Chiren (Jennifer Connelly) and Zapan (Ed Skrein). Alita is at the center of it all, herself trying to figure out what’s going on.

And that’s the problem. What is going on? No doubt the cast is stacked with Oscar-winners (Ali, Connelly and Waltz not to mention Cameron), but all the talent in the world can’t help a film that zigs and zags all the way through. And it’s not that all of the supporting characters are just…there. They all have a point and they are all connected, perhaps too much so. And there’s no fault in the performances, Salazar in particular excels in the lead role. But with so much going on an so many characters to take care of, things seem to get lost in the shuffle. I think this might be why all of Cameron’s films are around three hours long. While certainly not a bad film, this one seems to have too many cooks in the kitchen on the production side of things.

If you pony up for the 4K set then you’ll get no less than three different visual presentations of the film. The Blu-ray, the 4K and included in this set is a 3D version. Yep, it’s not dead yet and this might be one of the better examples of the format. Each version looks stunning, though for the true immersive experience I’d have to give the edge to the 3D. Obviously, the larger your television, the better. Blending a LOT of CGI into the film creates a very unique experience. Again, I have to reference Ready Player One as a footnote. Colors are a bit muted, but also strikingly amazing. Detail is second to none. The HDR of the 4K version gives that the edge in terms of overall picture quality. It’s a bit tough to give one rating to three different presentations, but let’s just say that no matter which route you go, you’ll be a happy camper.

Things get a bit more confusing with the audio presentations. The Blu-ray and 3D version both have the same DTS HD Master Audio 7.1 mix that’s sure to give your system a workout. The 4K version ups the ante a bit with a Dolby Atmos soundtrack. Clearly we know which one sounds the best. So yes, it’s a bit of an apples to oranges comparison with the audio. If you want the best overall viewing and listening experience, go with the 4K, but in all truth I’d say the 3D version gives the best and most immersive experience. Yes, I realize that second sentence contradicts the one before it. All of them contain strong vocals, dynamic audio and enough LFE to shake a stick at. As I so often say, no matter which version you go with, it’s a winner.

Alita: Battle Angel was often entertaining, but I felt it a bit disjointed. When you’ve got two acclaimed filmmakers like James Cameron and Robert Rodriguez things can go really right or really wrong. I won’t say the latter happened here, but as I said above – I think there were too many cooks in the kitchen. It’s visually amazing and the sound is off the charts. Certainly for the technical attributes alone, it’s worth seeing.