It is pretty rare that audiences are treated to big budget hard science fiction films. It is not unusual to find a light science fiction film like Independence Day or Guardians of the Galaxy, but films like 2001: A Space Odyssey and Blade Runner are not incredibly common. This is partially due to the fact that films of this type rarely make a large profit quickly. If they are lucky, they will generate dedicated fan bases and a profit over time. A case in point: Blade Runner 2049 was critically adored but failed to make a return at the box office (after factoring in marketing costs.) If a critically acclaimed sequel to one of the greatest science fiction films of all time featuring the star power of Harrison Ford and Ryan Gosling cannot turn a profit, Hollywood is going to be less likely to green light another off-kilter science fiction film that is aimed squarely at intelligent audiences. That is why I was excited to watch James Gray’s recent film Ad Astra.

As the film begins, in the near future, astronaut Roy Hill (Brad Pitt) works on top of a large international space antenna that stretches from the ground to outside of Earth’s stratosphere. A dramatic surge causes an explosion that nearly kills Roy and causes him to jump from his position and parachute to the Earth. In this instance, Roy proves that he is able to maintain calm during any heightened situation. His pulse never rises above 80 bpm despite the extreme circumstances. Roy’s superiors at U.S. Space Command bring Roy into a top-secret briefing. The dramatic electrical surges have been caused by an atmospheric disruption on Neptune and threaten to be a catastrophic event for the Earth. The disruption has been traced to the LIMA Project – a space exploration project which hoped to find extraterrestrial life in the outer reaches of space but lost touch with the earth over two decades earlier. The project had been helmed by Roy’s father, H. Clifford McBride (Tommy Lee Jones.) Space Comm informs Roy that they have good reason to believe his father is alive. Roy’s mission is to travel to the moon and then to hitch a ride to Mars. There he can communicate with his father from the underground base on Mars which has not been impacted by the surge. The hope is to reach him so that his position can be pinpointed.

Ad Astra is definitely one of the most daring films of the year. Honestly it is almost a perfect film, but it sadly fails to fully connect on an emotional level in as meaningful a way as it tries so desperately to achieve. The production design of the film is the best of any film this year (with the exception of Once Upon a Time… in Hollywood which recreated Los Angeles in the Sixties perfectly.) Everything from set design to costume design to visual effects to cinematography are all perfectly done. I am not exaggerating when I say all of these elements are flawless and if they do not receive nominations by the Academy it would be a travesty. The acting is also fantastic. Brad Pitt is nuanced and excellent, bringing great depth to his performance. It is one of his better performances, and that is saying a lot. The supporting performances are great also by both Donald Sutherland and Tommy Lee Jones, but this is firmly Brad Pitt’s film. The film is told almost exclusively from the perspective of Roy and that means that Brad Pitt is onscreen for almost every second of the film. The direction can not be faulted. The writers, director James Gray and colleague Ethan Gross, have created a compelling vision of a future that is not far removed from our time now. The script benefits from the immense amount of research they put into every aspect of the film. The special features reveal that they researched everything from how a bullet would be shot in space to the way that blood would look in anti-gravity. The film also takes some tremendous risks with the arc of the story, doing some truly unique things that have never been done in any film ever before. There are two scenes that are going to be very surprising and satisfying for any viewer of the film. I won’t ruin them for you, but you will know them when you see them. All of these things work.

So, what keeps the film from being perfect? While the vision of the future presented in the film is compelling (and I feel will be proved to be largely correct) the emotional core of the film is not as developed as I had anticipated. The film tries to let us read into the emotions of Roy through narration that reminded me of a Terrence Mallick film. This makes sense because Brad Pitt is silent throughout much of the film. But for the finale, the emotional payoff of the film is somewhat stilted. It is unfortunate because the finale could have been so much more cathartic for the audience. The only other issue of the film is that the pacing at times drags slightly. I am accustomed to this pace, but sensitive viewers will not want to expect this to be an action film. It is very much a drama.

Presented in 2.39:1 aspect ratio in Native 4K UHD, Ad Astra is a really beautiful film. I mean – it is a REALLY beautiful film. The cinematography by Hoyt Van Hoytema is incredible and unique. The visual impact of the film cannot be denied and the added HDR range of the 4K really makes a difference. This one deserves to be viewed in UHD.

The audio presentation on Ad Astra is breathtaking. The film has one of the best scores I have heard this year. Max Richter brings every clever idea imaginable to the score with a great mix of symphonic and electronic noise. I loved it. Add to that the incredible sound mix in jaw dropping Dolby Atmos and you can bet that this track delivers.

The supplements come together as a series of EPKs that focus on individual aspects of the film production and form a nice whole. They are in order:

Ad Astra is a near perfect film, but the lack of an emotional payoff makes it an enjoyable film with some truly incredible ideas. That should not keep you from checking it out. The acting, production design, cinematography, special effects, and everything are out of this world. I just wish that they had kept the film’s emotional core more grounded. That said, this film has continued to grow on me in the subsequent viewings since a few days ago. Check it out and make up your mind for yourself. The UHD presentation is top notch. 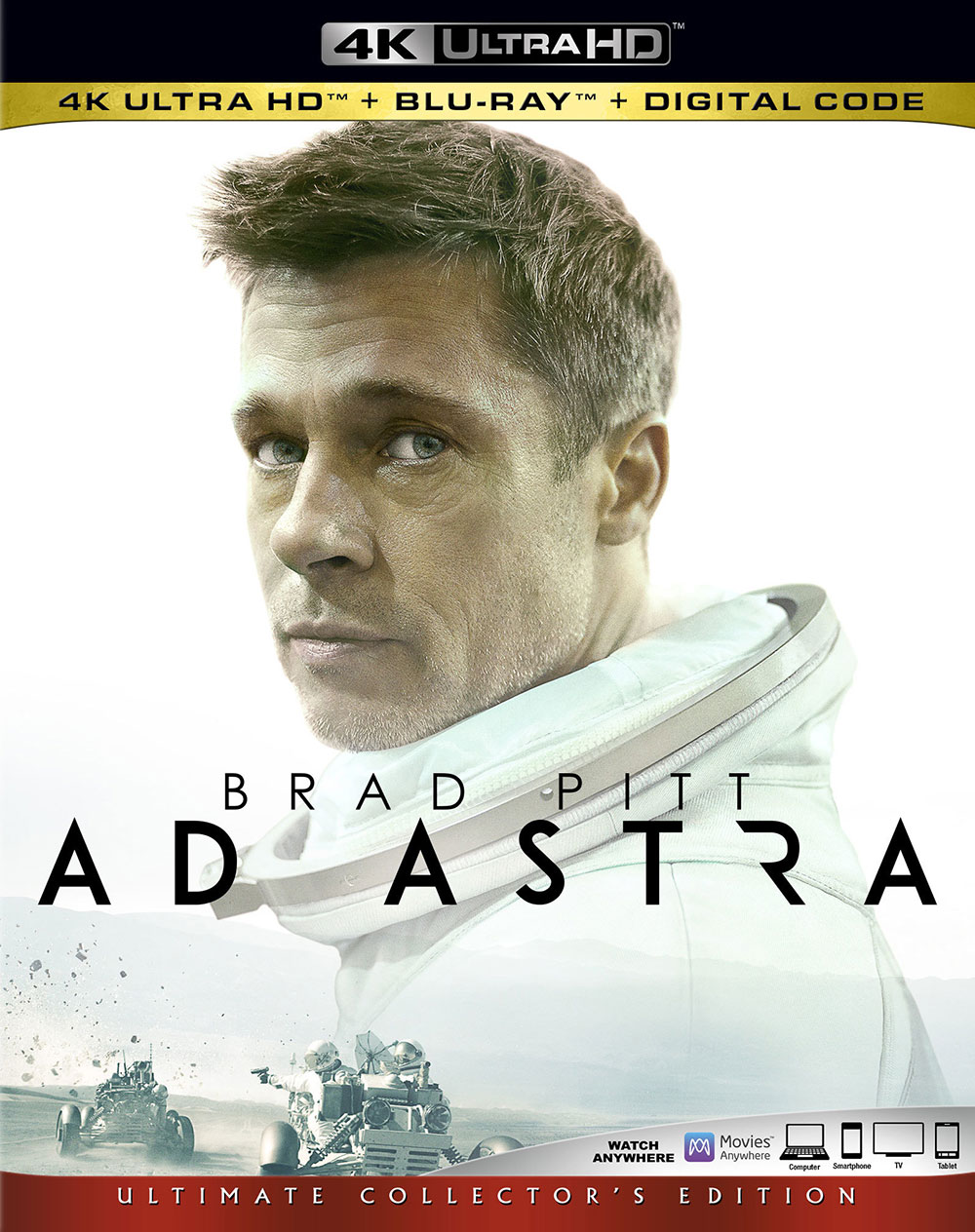