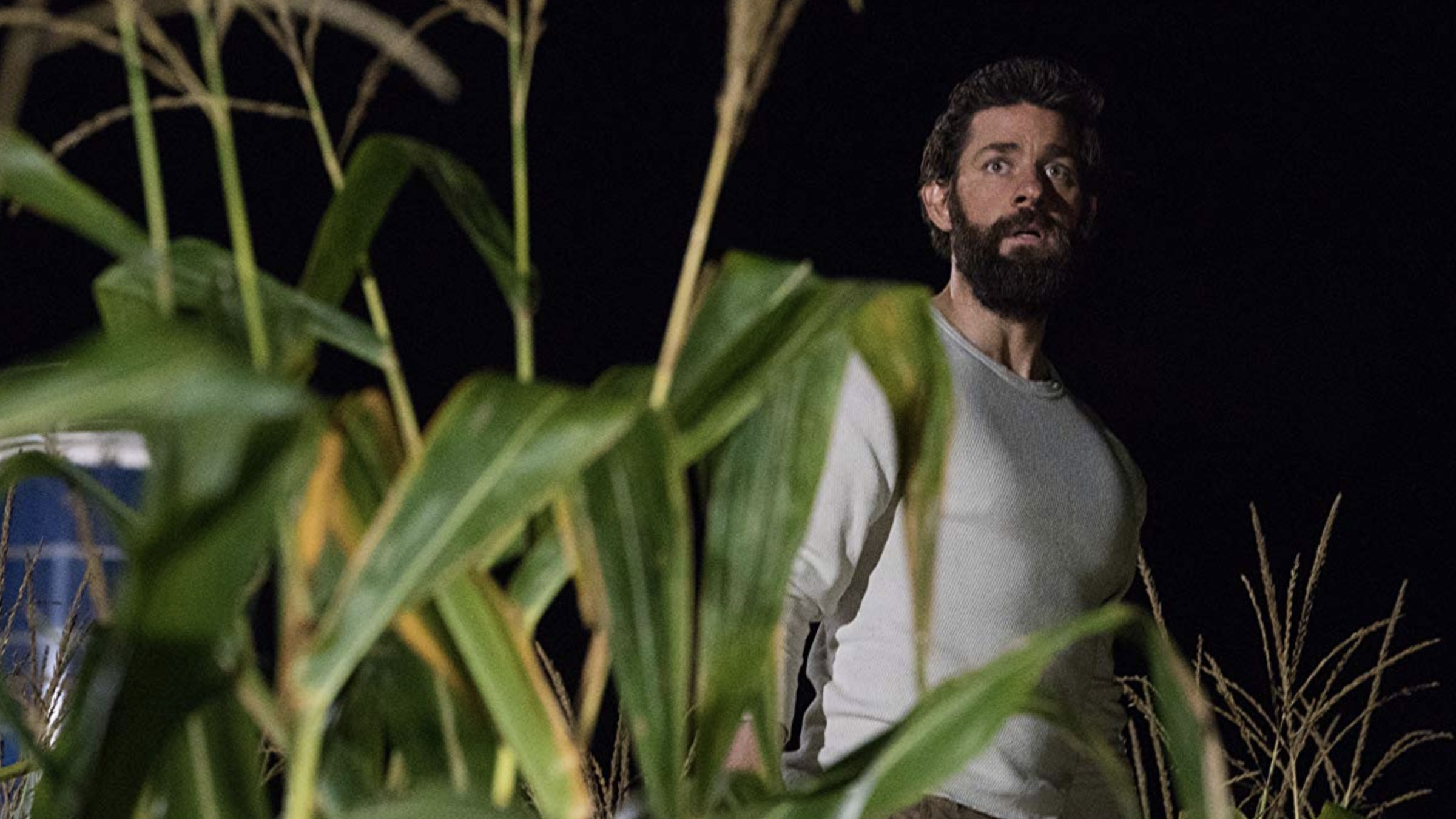 Having been only briefly familiar with A Quiet Place, I feel that was the best way to go into watching it. I knew that it starred John Krasinski and Emily Blunt (real-life husband and wife) and that it was supposed to be a horror movie. And that it made a lot of money. That’s it. Nothing else. And, in a way, that’s a good thing because the more you know about this movie, the less effective it will (or should) become. By and large, smaller films that gross nearly $200 million dollars are pretty rare. I can think of My Big Fat Greek Wedding and…well, that’s about it. But with a scant budget of $17 million, the film has managed to near that magical mark and will likely surpass it. So when the disc arrived, my interest was piqued. The guy from The Office in a horror film. Sounds intriguing.

Set in the very near future (early 2020’s), we meet a family struggling to survive. Evidently the Earth has been invaded by creatures from outer space who are blind, but hunt solely based on sound. And, from the lack of other humans you see in the film, they’ve managed to wipe out a good portion of our race. We meet the Abbotts and though their names are never spoken, the end credits tell us that their names are Lee (John Krasinski) and Evelyn (Emily Blunt). Their son, Marcus (Noah Jupe) and hearing-impaired daughter Regan (Millicent Simmonds) live on a large plot of land and they carry out their daily routine in near silence. We learn from an early event what happens when too much (if any) noise is made. Is this really living?

It’s said that less is more, especially when it comes to horror films. Anyone who’s seen Jaws will readily agree. There isn’t a lot of rhyme or reason as to the events in this film and, truthfully, it doesn’t need them. We’re able to figure out what happens pretty quickly. We follow the Abbotts as they try to eek out a living in what would have been a typical family, though the invaders have changed all of that. Humans have the ability to adapt and survive and this is epitomized in the film. It’s not uplifting, but a tense 90 minutes that flies by so fast, you’ll think your watch is broken. Krasinski and Blunt have strong performances and Millicent Simmonds, who is deaf in real-life, taught the actors much of the sign language used in the film. A Quiet Place might not be the scariest movie I’ve ever seen, but it is original and it’s a great movie-going experience.

Paramount brings A Quiet Place to the Ultra HD format with a 2.40:1 HEVC 4K trasnfer. Being a new movie and new to the format, we’d expect nothing less than perfection and that’s nearly what we get. A majority of the film is dark, with only isolated shots of light. The “aliens” have a very unique look to them, though the detail and contrast on their “skin” is something to behold. The increased color depth of the 4K version gives it a slight edge on its Blu-ray counterpart, but make no mistake that whichever version you go with will look good. Blacks are deep and solid, razor sharp detail and strong contrast all contribute to a great-looking picture.

It might seem oxymoronic to put a Dolby Atmos track on this film. There’s not a single word of spoken dialogue for at least 30 minutes, rather all we get are some random sounds here and there as well as the sound of aliens snacking on their prey. But, the Dolby Atmos soundtrack has plenty of times to flex its muscle and we’re even privy to a scene in which the Abbotts share an iPod with Neil Young’s “Harvest Moon.” How nice. This is more of a passive soundtrack than anything else, but it does the job effectively and it’s surprisingly robust given the subject matter. Granted the film ends on a high note (literally), so if you’re looking for a silver lining – there you go.

Praise was lauded on this film and with good reason. It’s original, tense and certainly one of a kind. Great performances all around, coupled with the palpable tension and fear that would surround such an event. Paramount’s Ultra HD looks and sounds great, though the inclusion of only three featurettes is a bit disappointing. Still, it’s one of the films to see this year and doing so in 4K makes that much better.

This steelbook edition is really no different than Paramount’s 4K disc. It features some new art and a transparent cover that will protect the case. If steelbooks are your thing, then this one is pretty cool.